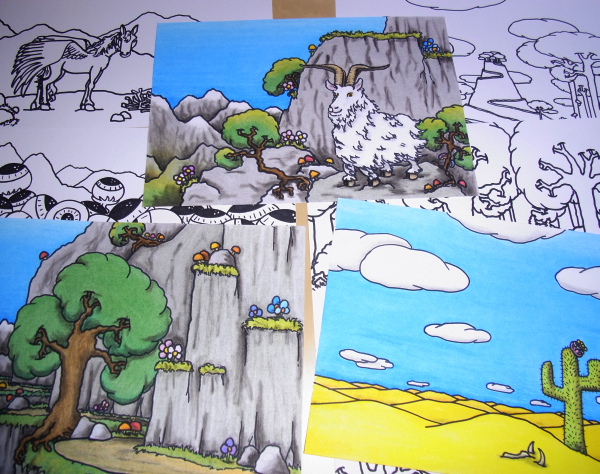 Ithaka of the Clouds has been on my mind for a long time. It began as a tiny seed of an idea: a game about a troll. From there it grew over the years, never withering despite the hardships that we faced. It became the tale of two trolls: a tale of love and life and long journeys. But it still wasn’t quite ready – until suddenly a title appeared, and everything fell into place. Καβάφης showed me the way.

Constantine Cavafy (1863-1933) is widely considered one of the greatest Greek poets, and I agree with that assessment. Poems like Ithaka, Waiting for the Barbarians and Thermopylae have been a huge influence on me. I wish I could share with you how wise Ithaka is, how relevant the satire of Waiting for the Barbarians remains, how well Thermopylae expresses my understanding of struggle and principles. Sadly, Cavafy’s poetry does not translate well into English or any other language that I know. But while I can’t share the beauty of his poetry with most of you, I can share the paths to the Lands of Dream that it opened up for me.

Ithaka of the Clouds will not be a direct adaptation of the work of Cavafy, but it will be thoroughly entwined with its themes. His poems are often divided into three categories: the sensual, the historical, and the philosophical. Ithaka of the Clouds will draw on all three as it tells the story of two lovers travelling across the Lands of Dream. (Those of you who have played previous games of mine will recognize that these themes have been there since the beginning.)

But what will it be like? Well, I’m not going to tell you everything. As usual, you can expect a game that doesn’t draw a line between the serious and the silly. You can expect a game that is more interested in people and places and details than it is in complex puzzles. You can expect colourful handdrawn graphics by Verena Kyratzes and another astounding soundtrack by Chris Christodoulou. You can also expect it to be big – bigger even than The Sea Will Claim Everything, which was much bigger than a lot of people expected. The gameplay will remain simple and focused on the exploration of spaces (literal and metaphorical), but there will also be new elements – trolls are builders and craftsmen, after all, and in this game there are two of them. And because the story is about journeys, it will be more focused on moving forward; you will wander across many lands.

There’s more, of course, but I’m not going to tell you. Enjoying the journey is the whole point.

Very soon there will be an Indiegogo campaign to help make this game possible. We’ll be asking for a lot less than most projects, but we will still need a lot of support to make this happen. Ithaka of the Clouds is really, really important to us. It may be the last major Lands of Dream game, and it will play a very significant role in the greater tapestry of stories; if the funding campaign works out, it will not only significantly improve our lives (so we can make this game without starving), but it will also allow us to create something that we are deeply invested in.

These strange, bittersweet games have probably been our most significant contribution to the medium. They mean a lot to a lot of people, in a very personal way. For me, they are probably the main reason that I haven’t abandoned the medium yet; when I’m depressed by the difficulties of being an indie game developer, it’s the fact that people care so much about the Lands of Dream that keeps me going. Being able to make Ithaka of the Clouds would be more than just wonderful; it would be life-changing and life-affirming.