Marc-Uwe Kling returns with a new version of his brilliant song, with even better lyrics – which he proceeds to sing to an audience which is, as my friend Julian put it, visibly not amused. Ah, the joys of telling middle-class pseudo-progressive Germany the truth about the consequences of its actions.

Yes, the song and video are in German, so if you don’t speak that particular language, you won’t be able to enjoy this masterpiece. Don’t be sad, though; except for this and the original-language version of Gothic I and II, you’re not missing much. Goethe is overrated, Schiller couldn’t write to save his life, and most of the rest is better when translated anyway.

Is it any wonder I want to get out of this country? Rootkits on my computer, idiots in the government, hypocrites in the audience… and the weather still sucks.

At least they make good RPGs.

P.S. When I say that Gothic II is better art than the complete works of Goethe, I mean it. I hope some German art critic reads this and dies.

You know, despite it being influenced way too much by JRPGs, and despite having some truly idiotic features (such as the system for saving, the lack of choices or detail in the main storyline, and the NPCs), I was enjoying Fable: The Lost Chapters , which Verena gave me as a present. It was quite a bit of fun, especially for someone as starved for a decent RPG as myself. (Most of the recent ones I’ve played were pretty, but boring.)

Until, that is, I started the game up this morning and saw that my profile and all its savegames were gone. Poof. Just like that. And no Mr. Game Designer, I’m not replaying the huge and mind-numbingly boring intro, nor am I redoing all those unbelievably annoying and tedious NPC quests again.

In other words, I’m out of gaming material. Again. 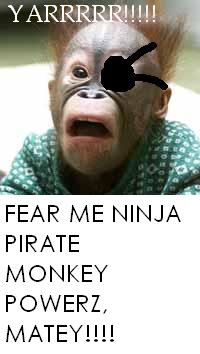 Few things make me as deliriously happy as the song “Scurvy!” by Captain Bogg & Salty. There’s just nothing as cool as pirates, is there?

No, ninjas aren’t as cool. Not even half as cool. They’re only cool when they’re also monkeys. And even in that rare case, pirates are still much, much cooler.

And I suppose I have to put something else here, because otherwise the image screws up the formatting.

So, don’t forget: if there is scurvy on your pirate ship, eat a lime!

Peter David has an intelligent and eloquent post about the Christian family that let their young daughter die of diabetes because they thought God would save her. It is profoundly depressing to see how deluded people can be (and I’m not referring to their religiosity per se; read David’s post). It is also a strong reminder of how little many Christians know about their own Bible.

The title is a reference to a Babylon 5 episode about the same topic (not written by Peter David). I was immediately reminded of it, and of the fact that some people think the story is unrealistic. How unfortunate that it isn’t. But the thing is this: in the B5 episode, the parents are deeply affected by their child’s state. Death by diabetes is slow and horrible, yet Kara Neumann’s parents didn’t seem to be moved by that, arrogantly trusting that they were the Chosen Ones to whom God would exclusively reveal himself. There is only one word for this kind of behaviour: madness.

In the summer, most of the time it just rained. In January and February, we had days where it was so hot that you could go out in a T-shirt. (Not just one or two freak days, but quite a few.) And we’re talking about Germany here. We didn’t see an inch of snow the whole winter. Nothing. It rained sometimes, but often it was quite warm.

Now, in March, with all the trees in full bloom, it’s snowing. It has been snowing, again and again, for several days now.

And there are still people who claim there’s no such thing as climate change? Take a look around, people! The climate isn’t just changing, it’s completely fucked.

I wonder sometimes… when we have children, how will we explain summer to them? Or winter? Hell, what about autumn? These things will no longer exist, not like they used to.

The good thing, however, is that as long as we’re around – and by “we” I mean our entire species, the species that Clarke had hope for when so many other writers have nothing but fashionable misanthropy – his stories and his ideas will be with us. Forever.

(And if there is an afterlife, I will find him and kick his arse for dying before someone could make a Rama movie.)

Stephen Fry is not only one of my literary heroes (and someone I hugely admire in general), he’s also a blogger (or blessayist, as he delightfully puts it). And since he recently broke his arm and can’t blog all too well, he’s now posting podcasts (or Podgrams, as they are called on site). (Look, it’s another parenthesis. They were on sale today.)

Anyway, his most recent podgram is called Bored of the Dance , and is all about dancing. (Or possibly about not dancing.) It’s hilarious, eloquent, and deeply, profoundly true. (For me. )(Not for most people.)(That’s it.)(Go and listen to it.)(Here’s the link again.)(I don’t like pork.)(Chicken is good, though.)

I went into the cinema with the lowest expectations. The trailer showed us wooly mammoths building the pyramids and good white guys fighting evil Arab-dudes; not exactly a promising premise. So I was surprised to find that Roland Emmerich has finally made another good movie (the other one being Stargate ). Not brilliant, no. There are some scenes that could’ve been very touching, but the movie never quite takes off emotionally. Emmerich is competent, but not visionary, and the Zimmer/Badelt-knockoff music fares likewise: good, but not special. Which is still a whole lot better than most movies.

So, here are some thoughts:

All in all – a good and entertaining way of spending some time. It won’t change your life, but it’s not forgettable, either. 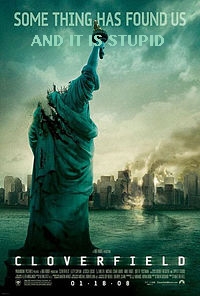 Neil Gaiman posted a link to this video, and I’ve been singing the song all day, driving Verena insane. (And just ten minutes ago she caught herself singing it too. Haha!)