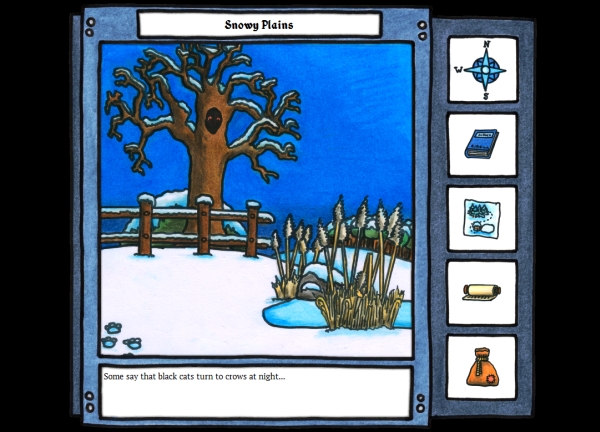 So, hey, The Talos Principle got some pretty nifty reviews, and even won some awards! That’s pretty cool. In fact, that’s awesome. I’m very, very happy. Whatever reservations I may have about the state of games criticism, I’m pretty glad that we were right in assuming that the people who play games aren’t as stupid as we’re constantly being told, that treating players as adults is not actually a crime. Sure, there’s a lot of infantile stuff out there, but if we all tell ourselves that nothing else can succeed… well, that’s a self-fulfilling prophecy.

I’m currently extremely busy alternating between really fun stuff and really boring stuff. On the one hand, there’s The Council of Crows, which is basically what we said we were going to do when we started Ithaka of the Clouds. It’s a full-sized Lands of Dream game. It has a really unique atmosphere. It has some of the best images Verena has ever drawn. It has stunningly beautiful music. And it even covers some of the themes Ithaka was meant to cover, which makes sense, since at one point it was actually part of Ithaka, though that seems silly now.

It’s obviously taking a bit longer than I’d like to, but that’s mainly because it started as a medium-sized game and now has as many images as The Sea Will Claim Everything. (It’s differently structured, and thus probably a little bit shorter, but it’s still quite big.) In general, it’s going really well and I’m very excited about it.

Unfortunately, I also have to take care of a bunch of tax-related paperwork, which is extremely exhausting and time-consuming, and it doesn’t help that January and February are usually the months when my depression is at its worst.

There’s also other work, good work, to take care of, so right now my schedule is somewhat overloaded. Overall, I feel like I’m making progress, like my promise last year that I would accelerate is working, but I’ve got to make sure I keep some kind of balance. It’s easy to start feeling hopeless and cynical when the world is full of problems and the main respone seems to be hypocrisy.

You should really read Lud-in-the-Mist, by the way. I read a lot of good novels last year, but that one went straight to my top ten favourites. I realize that’s a pretty random thing to say, but there you go.

(Oh, and if anyone’s looking for a writer… my schedule is really full right now, but it won’t be in a few weeks, and I could use another gig. Just saying.)