The electoral victory of SYRIZA in the Greek elections has been described as everything from momentous victory of the Left to gigantic catastrophe, but the truth is that a lot of the coverage wildly exaggerates what SYRIZA is, what it stands for, and what it aims to achieve. 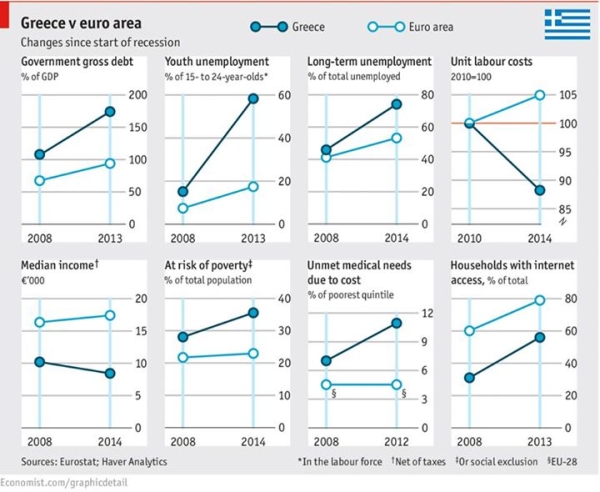 It’s impossible to detail the long and tortuous history of labour struggles in Greece, but a couple of important historical facts should be noted before we look at recent events.

Austerity hardly began with the recent economic crisis. The necessity of austerity was already a major mantra of the PASOK government of Kostas Simitis (1996-2004). PASOK, like most social-democratic parties in Europe, turned to increasingly extreme neoliberal policies long before the crisis, policies that continued to intensify under the notably corrupt Nea Dimokratia government of Kostas Karamanlis (2004-2009). The notion that Greece was some manner of “socialist paradise” where workers enjoyed huge benefits is erroneous and cannot be backed up by facts. In simplistic terms, Greeks always worked more hours, for less money and with fewer rights, than Germans.

It is ironic that the PASOK government of George Papandreou (2009-2011) was voted into power precisely to stop this process of erosion, as it was this government, under the pretext of “we have no other choice,” that began the total destruction not only of labour rights, but of democratic processes and general quality of life. When his government fell apart, it was followed by an unconstitutional, unelected “interim government of national unity” – strongly supported by Germany and the EU – which included the far-right party LAOS and legitimized fascist and neonazi tendencies that ultimately gave rise to Golden Dawn. This illegal government (2011-2012) was followed by a coalition between Nea Dimokratia, PASOK and DIMAR (the Democratic Left, a short-lived party formed in a successful attempt to divert votes from SYRIZA), under Antonis Samaras (2012-2015).

From 2009 to 2015, these three governments – whose policies are virtually indistinguishable – led Greece into an economic, political and humanitarian catastrophe. The dictats of the so-called “troika” (Eurogroup, European Central Bank, International Monetary Funds) led to a tremendous rise in unemployment, wages reaching unlivable lows, the near-total destruction of the country’s healthcare and educational systems, and soaring suicide rates. A huge swathe of the population was plunged into abject poverty while the country’s infrastructure either decayed or was sold off to private hands for dimes. The reforms demanded by the troika did nothing to stop corruption or tax evasion, but gave more power to the very people who had built their careers on both.

Fiscally, as many economists had predicted, and as had happened in every previous case, austerity did absolutely nothing to improve the situation. While certain parties prospered – including, importantly, Germany – the debt continued to grow while the increasingly dire conditions of the population made any recovery virtually impossible.

To control the popular reaction to these failures, the Greek government turned to violent means. Police brutality reached new levels. Greece’s position on the World Press Freedom Index plummeted from 19 to 99, just under Gabon and Kyrgyzstan. The Samaras government in particular employed increasingly extreme anti-immigrant rhetoric and was closely tied to Golden Dawn, a criminal organization/neonazi party that was heavily promoted by the media. Satirists were prosecuted for offending religion while police officers (frequently supporters of Golden Dawn) got away with crime after crime.

Despite a media campaign of terror against SYRIZA, the party won the January 2015 elections on a platform of reversing austerity. But what exactly is SYRIZA?

SYRIZA, the Coalition of the Radical Left (though “radical” is perhaps not an ideal translation of Ριζοσπαστικής) is a coalition of leftist parties, the largest of which was itself a coalition, Synaspismos, whose full official title was Coalition of the Left of Movements and Ecology. The cumbersome nature of that title serves as an excellent descriptor of the party’s nature: a somewhat-awkward grouping of generally left-of-centre movements, largely middle-class and academic in character, and by necessity forced to boil down its policies to the most agreeable (and least radical) common denominator.

Since the very beginning, and to the consternation of some of its members, SYRIZA and Synaspismos have been strongly pro-EU. (This may seem surprising to those who have only heard of SYRIZA as it is described by the mainstream media.) This is as much an ideological as it is a political stance: in the frequently nationalist discourse of Greek politics, the liberal/progressive sections of the middle and upper classes see the EU as embodying a more rarefied internationalist, cosmopolitan perspective. The EU is seen as doing things properly (one might almost say “the German way”), with a lot of technocratic professionalism and without the corruption and cronyism that plagues Greek political life.

Economically, SYRIZA – and its Minister of Finance, Yanis Varoufakis – represent a relatively classical Keynesian perspective. They do not seek to abolish the profit motive, but to reform the system so that markets are more stable and produce slightly more even results. They want to abolish cronyism and tax evasion. They want to open up all the investigations into corruption that previous governments shut down to protect their own. They want to increase the currently minimal to nonexistent taxes on the rich, lower the crushing taxes faced by the poor (doubly important in a country with so many small businesses) – redistribute enough wealth to raise not only living standards, that is, but purchasing power. In other words, they want to control capitalism enough to make it sustainable again.

A way out for now, that is. Even if adopted by all of Europe, SYRIZA’s policies cannot eliminate the internal contradictions of capitalism, nor can they permanently protect Europe from the next inevitable crisis of an outmoded economic system. What they offer is a chance for a little more stability, a little more quality of life: an extension of capitalism’s lifespan. As Varoufakis travels from country to country, he’s giving European leaders the opportunity to change course while remaining within the same framework. Their national elites will no longer earn as much, but from a rational capitalist point of view, the trade-off should be worth it. 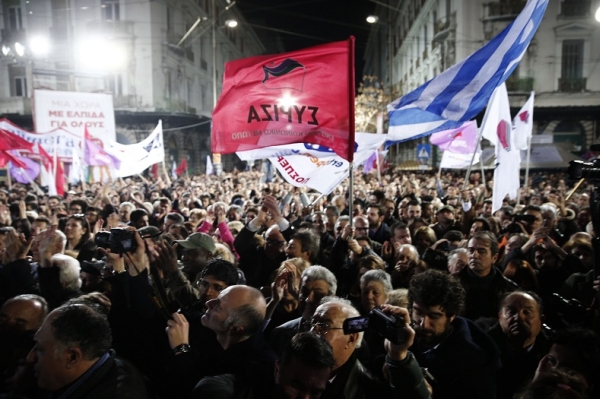 However, one of the main problems of capitalism is precisely its inability to make rational decisions, as those require the kind of long-term thinking that a system based on short-term profit cannot accomodate. This, and the calcified nature of the capitalist nation state, is most clearly embodied by Germany under the leadership of Angela Merkel. In the short term, the crisis in Greece is useful to German elites, as:

In the long term, there is little doubt that Germany’s policies will cause the collapse of the Eurozone and its own, export-based economy (who will buy your goods when you’ve destroyed your customers?), but this is something that the German leadership has shown itself incapable of grasping, as the representatives of a younger, healthier capitalism might once have. Their actions show that their primary concern is to maintain their authority and keep their country’s elites earning the maximum possible short-term income, even if this means abandoning the possibility of rational long-term solutions.

But what about the socialist perspective in all this? Is SYRIZA an ally or an enemy? Is giving capitalism some breathing space a good thing?

The answers to these questions are not simple. SYRIZA is neither the revolutionary party that some make it out to be, nor is it a neoliberal party of pseudo-leftists. It might become the latter in a few years, but right now it does represent a shift in European politics. Not a shift towards socialism, but a significant shift nevertheless.

Historical experience shows that there is a real danger of slipping into a lesser-evilist attitude; this is what kept parties like PASOK in power for so long. The notion that it’s possible to “nudge the party to the left” through various toothless actions also appears highly dubious. But the humanitarian situation in Greece is desperate; the decay of democracy and the rise of the far right are very serious threats. Allowing the situation to continue will not automatically result in some kind of communist revolution – particularly given the role of the Greek Communist Party (KKE) in blocking any real popular movement for change with its reactionary Stalinist attitudes. The knife has reached the bone, as the Greek saying goes. More years of austerity will result not only in thousands of deaths, but quite possibly in a catastrophic shift to the right, as embodied by Golden Dawn.

For the socialist left, SYRIZA cannot be seen as a solution to capitalism, but it may well represent an important step. If SYRIZA – buttressed by the people – can achieve even a slight change of course:

Can this go wrong? Of course. It is certainly easy to see unsettling parallels between the discourse about “hope” that surrounded Obama and the equivalent discourse about Tsipras. But where Obama continued the policies of George W. Bush almost to the letter, even the relatively moderate policies of SYRIZA so far seem to indicate a much bigger break from the status quo. That alone – the idea that things can change, that austerity as the Greeks experienced it was not inevitable – has already had a huge impact on the discourse.

It’s important not to succumb to fantasies here. SYRIZA will not end capitalism. But we’re also not in a revolutionary situation – there is no great organized labour movement in Greece that could seize power at the moment, nor does there seem to be one anywhere else. One should be created, no doubt, but in Greece the population was inches away from collapsing into total apathy and despair.

It’s not necessary to identify with SYRIZA or turn it into some kind of symbol. But right now, international solidarity with the Greek people, against austerity and neoliberal dogma, could push this relatively harmless Keynesian party towards creating the conditions for a strengthening of labour struggles in Europe. The alternative, I fear, is a continued slide into fascism and despair.