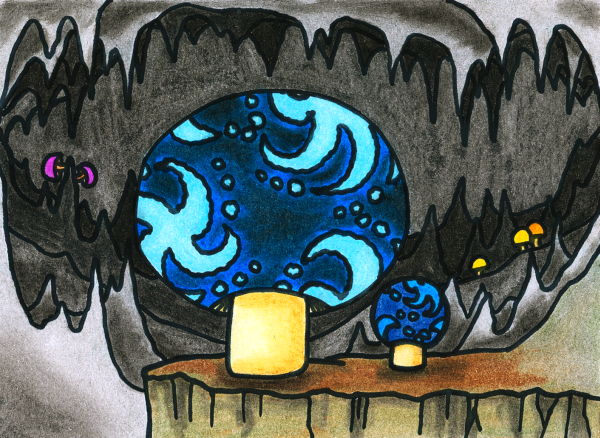 Mushrooms have ever been fascinating: neither plant nor animal, they seem to be quite unlike anything else that grows and lives. Furthermore, many have properties as strange as their colours: some are food, others poison; some bring visions, others death; some are delicious, others taste entirely too much like underdone feet.

Perhaps the strangest of all mushrooms is the rare World Mushroom. It grows only in caves or in particularly dark forests, and unlike many mushrooms it grows slowly, sometimes taking years to reach its full size. But what makes it truly unusual is that, as its name implies, it is a world.

Everything within a World Mushroom is part of a universe unto itself – places and beings and histories, as varied and peculiar as those of our somewhat larger domain. Within each mushroom is a different world, each with its own heroes and villains, great empires and small nations, loves, tragedies, hatreds and triumphs, utterly unlike what we know and yet so very similar.

Except that it is all so much faster. A day to us is a thousand years to them; lives come and go in the space of a breath. It is said that cats, being able to perceive the spirits of the dead, see these mushrooms as if they were perpetually giving off a fine mist, so many are the souls that come and go each moment.

In time, the mushroom dies, and the world within it comes to an end. The flesh of the mushroom becomes brittle – or, as the shamans prefer to say, crunchy. It may then be eaten, though carefully, for each bite brings long dreams of the world that once was, and it is possible to become lost in the memories.

The specimens shown here were found growing in a cave in the Mountains of Oddness. The bigger one is nearing the end of its life and will be probably die within the year; the smaller one has only recently begun to grow, and is expected to last several decades. The inhabitans of one are faced with the inevitable decline of all they know; within the other, sentience is only just beginning to awaken to a seemingly infinite universe, full of possibilities.

And what are we, in our world, to make of all this? That is left for each of us to decide. But I am always reminded of the words of an old poet, who said that Eternity is in love with the productions of Time. I am never quite certain whether that is beautiful or bitter, or both.

This entry in the Oneiropolis Compendium was made possible by Trond Nilsen, of Meme Hazard.