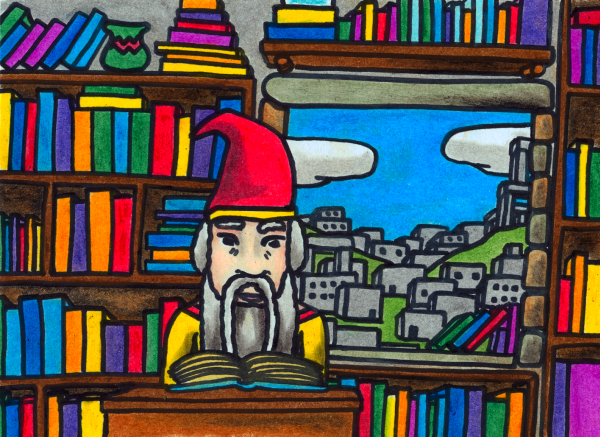 Kohlrabian Dialecticus is generally considered to be one of the most important academics of the Lands of Dream. Though he chooses to live in his beloved Southern Belzoond, his contributions to the academic output of Oneiropolis University should never be underestimated, neither in terms of his own work nor in terms of his support of the work of others. There are literally dozens of books that could never have existed without his editorial guidance.

For this he has gained the respect of many of his peers – though of course, academics being what they are, he has gained an equal amount of hate, vitriol and death threats. The latter mostly came from a certain postmodernist professor who was secretly in the employ of Urizen, before said entity had openly declared war on Oneiropolis; they ended when, while attempting to erase Dialecticus from existence by changing the discourse of reality, the professor was fatally deconstructed by the same laundry van that ran over Roland Barthes.

Southern Belzoond, as has been extensively documented elsewhere, is now under occupation by the forces of Urizen. Dialecticus has refused to move, however, and his tower has become a refuge for members of the local resistance. Whether Urizen will allow this situation to continue is unclear, but for the moment we can be thankful that voices of true reason continue to exist in this age of increasingly unsubtle tyranny.

As contributor or editor (a small selection):

This entry in the Oneiropolis Compendium was made possible by the Gnome of Gnome’s Lair.