The Independent Gaming Source has written a review of Desert Bridge.

The Strange and Somewhat Sinister Tale of the House at Desert Bridge (a name so long it breaks TIGdb) is one bloody funny adventure game. Even as a Yank, I feel I can inoffensively use the word “bloody” in this situation, because Desert Bridge employs a kind of droll, British humor that is genuinely infectious. Seriously, the amount of wordplay, puns, and nonsense in the game is staggering – it really takes absurdism to a whole new level, even for a genre that is kind of heavy on it.

All I can say is… wheee! After a long and very stressful week, and a Saturday spent trying to conjure up the energy to do something, anything – this has really made my day. Thank you TIGSource, thank you Derek Yu and thank you Gregory!

And now for something no sane person should ever do: I will comment on a comment. Yes, I know it is futile. I know this is how flamewars start (not that the person this is about is likely to read my blog, but you never know). And I know it is utterly pointless to take random online meanness seriously. The thing is, I don’t. Once you’ve had someone complain that they couldn’t figure out how to shoot in The Museum of Broken Memories, levity ensues. The reason I am going to comment is because this matter interests me in terms of game design.

I was not surprised by this. Not just because trolls and braindead people will always be around, but because we had anticipated this type of response from the moment we began designing the game. (The next comment, by the way, made me giggle. It still does, actually. Not so much because it defends my game, but because of the sheer beauty of a successful sarcastic put-down.)

As some of you may know, the artist credited on the game is Verena Huber. Verena is not only not eight years old, she is also someone who can draw professionally. She studies the badly named discipline of “Interior Architecture” (not interior design, though a lot of people often think so; not even necessarily related to interiors; essentially just architecture for smaller buildings) where things such as drawing (and photography, design, and a host of other skills) are part of your professional skills. And she’s good at it. She can draw things that take my breath away. And she can paint the most amazing things, too.

Why then do the graphics look like that? Because that’s what I asked for. I wanted the cartoon-like simplicity. I wanted the thick outlines and strong colours. Because that is what is appropriate for this game. If you were to replace the graphics with more “realistic” (a poor, much-abused word) ones, the game would lose half its charm. Half or more of its insane humour would stop working. Hell, an entire room in the game (trying to avoid spoilers here) would stop working. It wouldn’t feel like the lands of dream anymore, and the game would be pointless.

A lot of people seem to have completely lost the ability to think about graphics logically. We judge graphics by things like resolution and animation and physics and whether or not they’re 3D. You may judge an engine by those aspects, but graphics? It’s as ridiculous as blaming The Beauty and the Beast for not being live action, or the Mona Lisa for not being a photograph. Graphics should be judged by whether they are appropriate and whether they work. We may have different tastes and opinions there, and that’s perfectly fine – but hating a game for its type of graphics rather than their quality is just plain dumb. Especially if you haven’t even played the damn thing, and only looked at a screenshot on a website.

Me, I have a thick skin. It doesn’t bother me – especially here, where I’ve been expecting it. I was more frustrated by a couple of reviews of The Museum of Broken Memories, which casually dismissed the graphics as not good because they weren’t animated or 3D. The graphics were a lot of work on that one, and they do a lot of things that aren’t very common. I have no problem with people hating them, or saying the approach didn’t work for them, but I was bothered by people not looking beyond basic categorization. But then a number of people pointed out that they did get it and did like it (especially the collages, which were so important to me), so I was relieved.

I point this out not to try to earn sympathy points, but to show a real problem about how we think about game graphics. A lot of games that I thought looked fantastic were totally trashed in the press. And while I have thick skin, not everyone else does. I remember Verena being rather insecure about how people would react to Desert Bridge. So this makes me wonder: how many indie artists have thrown away their work because of trollish or barely thought-through criticism? Sure, any real artist will always start working again (I know Verena certainly would) but we are only human, and this type of doubt can eat away at you. Unless you are a megalomaniac like me, that is. Yes. Megalomania helps.

Maybe I should repost that old essay about the evolution of computer game graphics. Not that it will make a difference, but hey – some people might enjoy it.

Anyway, back to Gregory Weir. He’s just released a flash game called I Fell in Love With the Majesty of Colors and it is very, very fascinating. I haven’t found all the endings yet, but this game is exactly the kind I was imagining when I talked about making “short games” (as in short stories) years ago. Only that, as insane as I may be, I couldn’t have come up with a touching game about a Lovecraftian creature reaching up for balloons from the depths of the sea… definitely recommended. And when you’re done you can listen to some Lovecraftian Christmas music. 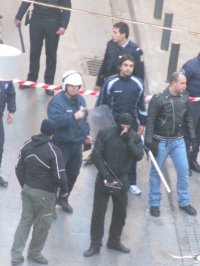 In Greece, the riots continue, as they should. As for the violence – more and more solid evidence has surfaced that a lot of it is caused not by evil terrorists, but by police provocateurs. Yep: the really dangerous people in the demonstrations, the guys with the hoods… are policemen. This government needs to fall. Badly.

I’m trying to figure out what I can do to help support this struggle. If I was there, I would be in the streets, but a protestor more or less wouldn’t really make much of a difference. Maybe there’s a way of drumming up some support and spreading information around here. If I wasn’t so uncomfortable with German (yes, it’s a native tongue, but I can’t express myself as well in it as in English; it’s just cumbersome), I’d organize some kind of public meeting. Maybe I will anyway. Something more tangible would also be good, but I don’t know what.