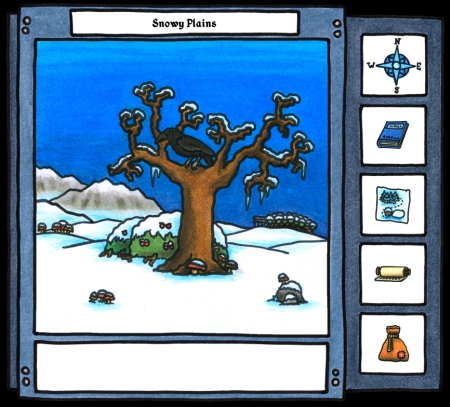 I recently finished my text game for the upcoming Fear of Twine exhibition. It’s called The Matter of the Great Red Dragon, is set in the Lands of Dream, and has turned out quite wonderful, even though the whole thing came to me in a flash at the last minute, after I’d thrown my original idea out the window. I don’t mean to brag, I’m just really happy with how it turned out. You should be able to play it in a week.

I am now returning to work on The Council of Crows, which may or may not be a working title. This is a short(er) Lands of Dream game – bigger than The Book of Living Magic but not as huge as The Sea Will Claim Everything – and will be free to all those who supported our Indiegogo. The rest of you will be able to get it for an affordable sum. Chris Christodoulou has written absolutely fantastic music for it, and Verena has drawn some of her most evocative art so far. I think it’ll be beautiful.

(The screenshot is old and a little unpolished, but that’s pretty much what it looks like.)

Incidentally, this game was supposed to come out much earlier, but I ran into a serious problem with how Windows 7 handles fonts in Multimedia Fusion games, and had to engineer an ugly but functional solution. This has also caused a delay for Ithaka of the Clouds, but don’t complain – you’re getting a free game!

(If your text looks weird and a bit jagged in The Sea Will Claim Everything, it’s a Windows feature called ClearType. There’s nothing I can currently do about it, so if it bothers you, you’ll have to turn it off before playing. I’m very sorry about this, and more than a little irritated. There doesn’t appear to be a simple solution, and I cannot currently go back and rewrite all the code for a game that sells almost nothing. Thankfully, not that many people seem to have had this problem or noticed it.)

I’m also working on a few other projects in parallel, including a platformer and another text game which… pertains to the Lands of Dream, to slightly paraphrase Dunsany. In fact, I’m quite in love with text games at the moment. Or actually with writing in general. Every now and then I get a chance to do really write and I remember that writing is actually what I’m all about.

And then there’s the Secret Project I’m Not Allowed To Tell You About, which does not involve squirrels, scorpions, or the use of the word “pronk.”

Exciting times. Now to just convince my body to defeat the common cold.