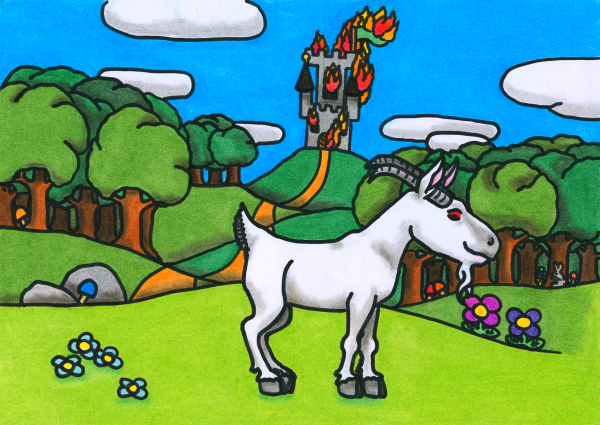 In times of peace and prosperity, when hunger is a distant memory and the pleasures of life are available even to the lowliest peasant, Herbert is just a silly little goat. He wanders the land, and people pat his head; sometimes he can even be seen in petting zoos, eating from the hands of children. To many he is nothing but a figure of fun, a goofy creature that makes the most wonderfully absurd noises. To those who live in cities, he seems like something out of a fairytale or an old cartoon, something that shouldn’t really exist in our serious modern world. (Only the people of Gont, who know a great deal about goats, are a little more respectful.)

But such times are rare, for the age of kings and queens has not yet passed, and many are the years when oppression weighs heavy on the backs of common folk. And then come the days when Herbert is feared, for he is Herbert the Mutant Radical Goat, whose spirit long ago possessed the creators of theatre, whose dances were danced around the fire when humankind was young. He is the force that persists, that laughs in the face of history. He is ancient and untameable, and sooner of later he will break down the castle doors; for he is Energy, and Energy cannot be stopped. Even when it does look a little silly.

Even now, Herbert is out there, moving among us, moving within us, and the kings and the queens tremble at his approach, and the poets mumble in their sleep and an ache in their souls reminds them of where their true allegiance lies.

As for his mutation… well, let’s just say he was quite popular in Ancient Greece.

This entry in the Oneiropolis Compendium was made possible by Bachi, the author of 36 Metric Weeks, who lives inside a thousand fat horses.