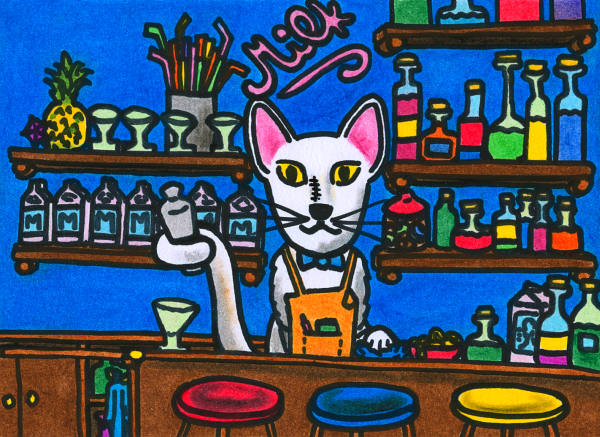 Whether you’re looking for a glass of fine brivari, a sip of miruvor or a traditional Katsouli milkshake, Dogpuncher’s Milk Bar is the place to go. Situated near the center of Oneiropolis (if Oneiropolis can be said to have a center, which is a matter of some debate), its customers are as varied as its drinks – tired travellers, exuberant academics, silly magicians, grinning scientists, mad artists and artistic madmen are just some of the few you might meet on a quiet night at Dogpuncher’s. Some sit quietly, others engage in passionate conversation; there is ample room for both in the mysteriously large interior, said to have been designed by a drunk Time Lord who originally intended it to be a closet.

Before becoming the owner of this establishment, Dogpuncher used to be (in his own words) “a real street fighting cat, a mean lean dog punching machine like you ain’t never seen before and like nobody ain’t seen since” who patrolled the streets of many a world, fighting for his food and meting out rough justice. He’s settled down now, even letting dogs into his establishment, “providing they don’t slobber too much,” but he still bears his scars with pride. The most prominent one, on his nose, he got from defending a kitten against a pack of corrupt police dogs. He’s good friends with Frank Serpico.

There’s something about Dogpuncher’s Milk Bar, something that people keep coming back for. Is it the atmosphere? Is it the food, the excellent nibbles? The famous selection of drinks? The friendly staff? (Left there by an old wizard, it now serves drinks and chats with customers.) Is it Gummitch and his pet human, Leiber, who entertain audiences once a week by telling stories? Is it Dogpuncher himself?

Who can say? Perhaps it is all of those things, or none of them. But when you’re in Oneiropolis, make sure to drop by and have a drink. You won’t regret it.

A Selection of Popular Cocktails:

This entry in the Oneiropolis Compendium was made possible by Sarah Crocker.