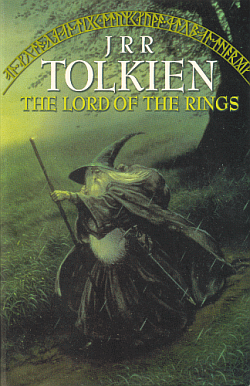 I’ve been re-reading The Lord of the Rings for a while now. I don’t get much time to read anymore, and I’m often too tired to read when I go to bed. But I’ve been making steady, if slow, progress, and have now reached the middle of the The Two Towers (the end of Book 3). I’ll write a long and ridiculously detailed post about my thoughts when I reach the end of the whole novel, but here are two things that I keep noticing.

The first thing is that The Lord of the Rings is such excellent literature. People talk so much about the setting and the constructed languages that they forget the sheer aesthetic beauty and literary depth of the novel. It’s not a great fantasy novel, it’s simply a great novel. I wish more readers would understand and appreciate this, including “fantasy readers” – so that maybe all these shitty hacks who can’t put two sentences together will stop selling a billion books on the basis of writing “fantasy.” (And yes, there are also contemporary novelists who write fantasy and are great – like Peter S. Beagle, or Patricia McKillip, or Steven Erikson.)

The second thing is that The Lord of the Rings is funny. By which I mean that there are many humorous passages and dialogues, and they are genuinely funny. Which just underscores the absurdity of the Peter Jackson films and their crass, immersion-breaking jokes. If you want Gimli to be funny, you don’t need to turn him into a clownish caricature; the character in the book has many funny things to say – without making any references to other movies or to anachronistic medical knowledge – and is loveable to boot. The same goes for Merry and Pippin, who are witty and charming and immensely likeable, instead of overly goofy and dumb. Or Legolas! Legolas isn’t just a series of stoic looks and CGI stunts; he is often quite funny, and his conversations with Gimli are beautiful, because they really are friends (and not just caricatures of the Other Races). Jackson and his screenwriters had all that and more to choose from, and instead they gave us dwarf-tossing jokes.