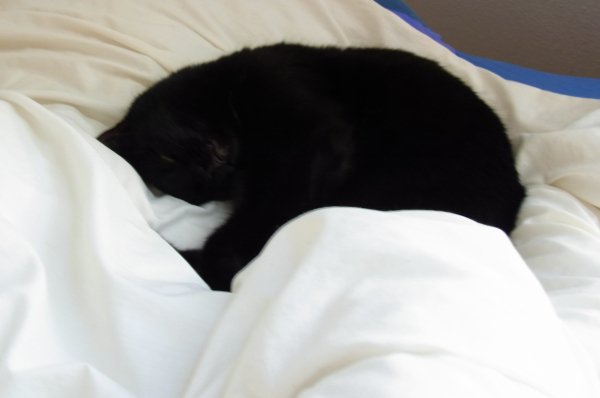 We’re going to Greece for two weeks tomorrow. My tooth has calmed down with the help of antibiotics, but it’ll have to be taken out as soon as we’re back.

The two things that terrify me the most are flying and dentists. I started having nightmares about planes yesterday.

My father-in-law is dropping by today to pick up the cat. She’ll have to spend the two weeks at a… well, I suppose the correct term is a boarding cattery, but that just sounds weird, and cat hotel sounds too posh. You know what I mean.

She’s been to such a place only once before, and it was something of a traumatic experience for her. Nothing terrible actually happened, but she’s not used to being anywhere but here, and she’s very attached to us (as are we to her). Having to do this to her feels awful; it feels like an absolute betrayal. But there’s no alternative. The old lady who used to take care of the cat doesn’t live here anymore, and we do have to go to Greece.

But I still feel like a bastard. I wish I could just explain.

In other news, it looks like I won’t be able to send The Book of Living Magic out to sponsors before we leave. It’s finished, but I’m making some visual changes to the GUI – it was suggested that the old one looked too clinical, so I’m replacing it with something that fits the style of the game better. Feedback so far is excellent, though, so I’m quite happy otherwise.

Maybe I’ll take everything along and make the changes on Verena’s laptop in Greece. I’ll need it for writing, anyway. We’ll see.

I don’t know how much of the anxiety I feel right now is travel-related. Alphaland did well (here’s another review – caution, spoilers), BoLM looks like it will do well (even though it’s late), I’ll be working on my novel and my screenplay and the Nexus City prequel… but I’m still nervous. I desperately want to get to a financially stable situation (nothing extravagant, just a vague sense of security) and get some more paperwork out of the way. The latter has been once again delayed by all my annoying health issues.

I don’t mean to whine. This year has been terrifying and at times very difficult, but I feel like I’m making real progress towards my goals. The situation still feels overwhelming, but in a slightly less hopeless way than before.

Anyway. Off to Greece tomorrow. I wonder what it will be like, after all they’ve done to the country. But if there’s still a bit of that sunlight and that sea, and maybe some of that good food, I’ll get a whole lot of writing done. That would be great. Because that is the only weapon I’ve got, the only thing I can contribute to the struggle: my words.

I don’t know how much they can change, but I promise you they’re going to try.