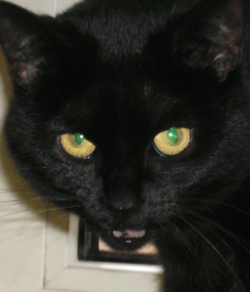 Except for going to a meeting related to the Writing Center where he works, and talking to some of his friends, and watching a surprisingly OK-ish episode of Heroes (“Company Man” – still in season one), Jonas spent most of his time working on Phenomenon 32. It was an interesting experience, though after finishing the forty-storey shopping centre he was rather reluctant to continue designing the rest of that level. At some point he decided it would be better to make the level a little smaller anyway, because even on his monstrously fast computer it ran rather slowly. Then, when he was done with the whole thing, he realized that the sewer system didn’t actually have an exit, which shocked him so profoundly that he started to write in the third person. He is planning to make more levels tomorrow, if his sanity permits it.

This is his cat speaking, by the way.