Phenomenon 32 is a free 2D exploration/platforming game with RPG elements.

In an alternate 1940s, scientists discover an extremely powerful and dangerous new area of physics, code-named Phenomenon 32. Years before it can be fully understood, the United States government uses it to create the ultimate weapon: the Reality Bomb, whose blast not only destroys matter, but shatters reality itself.

By the 1950s, the Great Depression has reached an unimaginable low. With the threat of revolution and pressure from the multinationals on the inside, and the aggressive policies of Stalinist Russia on the outside, the government sees only one way of revitalizing the economy: war.

Within less than a day, the Earth is gone. The Reality Bomb has done its work. 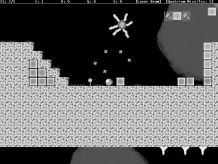 Twenty years later, a small population of humans is still alive on the moon. Previously dismissed and laughed about as a waste of money, the Moon Colony is now humanity’s last shelter from the insanity of war. But the Moon Colony was never meant to be completely self-sufficient, and now resources are finally running out.

There is only one place to get more.

In a special ship designed to withstand the dangerous environments of Earth, you are sent to explore our former planet, to gather information for research, and to find all the materials needed for the Moon Colony to survive.

But Earth is no longer the Earth we knew. Things have shifted; out from the cracks in reality, dangerous creatures have appeared. Radiation from Soviet bombs is widely spread; and in some places, reality itself is so fractured that not even your ship’s shields can protect you. Phenomenon 32 has turned the Earth into something… unknown.