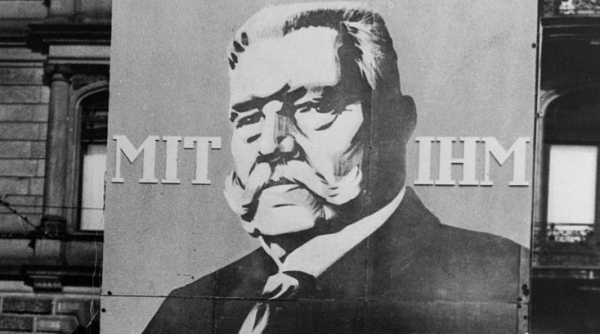 Once upon a time I was talking to an old German man.

“The government is blaming foreigners for everything,” he told me. “All these politicians, they’re completely corrupt! Taking money from corporations, doing whatever they’re told by the rich. They don’t care about ordinary people anymore. They don’t care about jobs or healthcare. They just line their pockets. And then they blame other countries for our problems, the problems they caused themselves. It’s not the fault of foreign people! They’re getting ripped off just like we are by their own politicians. It’s exactly the same. The politicians and the media are just trying to distract us from what’s being done to all of us.”

“None of this would have been allowed,” he said, “under Hitler.”

I’ve seen a lot of variations of that question being asked in tones of despair these last few months. And before I continue with my main point, let me note that pretty much nobody voted for Trump. There wasn’t a huge surge of support or anything like that. Mostly the people who vote Republican just voted Republican again. Most Americans don’t vote at all. To say that Trump is somehow representative of the majority of Americans is not just offensive, but downright silly. Clearly the majority of Americans care neither for Trump nor for Clinton. But let’s talk a bit about the people who did vote for him, who did have some kind of hope that Trump could “drain the swamp.”

Most ordinary people, particularly poor people, do not have a political education. I don’t say this with contempt. Where the hell are they supposed to get one? Schools certainly don’t teach anything even resembling meaningful political analysis; they don’t even provide the basic tools to help someone think about politics in a complex way. And what else is there? Newspapers? Television? We’re all aware of how terrible Fox News is, but are there alternatives? Look at the liberal side of the media right now, frothing at the mouth about evil Russians and exploding with outrage at Trump’s suggestion that the United States may have used shady methods to accomplish its goals in the past. (Incidentally, if you’re wondering why most of the world was terrified of the United States long before Trump, it may have something to do with a history of overthrowing democratically elected governments, invading countries, and assassinating those Americans who oppose such policies.)

Above all, the one concept that is truly taboo in all mainstream discourse is that of a material understanding of historical processes. Whether liberal or conservative, ideology is king, and the economic foundation of life must never be examined.

But the material, economic foundation of life is the one objective fact that everyone experiences. People work and their bosses prosper. Wages decline and bonuses soar. Banks get bailed out, people get kicked out. No matter what anyone wants to believe, this is what happens. This is the objective reality the majority of people experience. This is what they know with absolute certainty. The question is… what now? How do they react to this reality?

People are consistently and insistently told that they have two choices: liberal or conservative. This is true in most major capitalist countries; in the US, it takes the shape of the Democrats and the Republicans, two parties that pride themselves on their dedication to capitalism. No alternative to these two parties is permitted; even the suggestion is generally treated as heretical. (Even months after the election, liberal pundits are raging at the Green Party, although it demonstrably did not cause Clinton to lose the election. Their hate is so intense that even major journalists with millions of viewers will suggest that third-party candidates are actually Russian agents, the kind of position once associated with the lunatic fringe of the Republican Party ranting on talk radio.)

So, in the end, people are told that they must choose between two options or be considered fools or traitors. But what do these two options mean to them?

Let’s not think about what the policies of the two parties actually entail in the real world (the near-perfect continuity between the Bush and Obama administrations should say it all); let’s instead consider what people were offered in this last election. People tend to focus on the various details of what each candidate was speaking about, but I think it’s far more instructive to look at the overall direction of their message and its relation to the objective reality described above.

Yes, Trump’s campaign was full of appeals to hate, whereas Clinton spoke about diversity and inclusiveness (though she does not really have a history of standing for these things). But the basic premise of Clinton’s campaign was a big fat lie, whereas Trump’s was a truth that is rarely acknowledged. That everything Trump built on that truth was sheer horror isn’t the point, because he started with something that reflected the reality people were experiencing. Even poor people, oppressed people. And with Clinton, it doesn’t matter that on average she probably would have been less horrible and destabilizing (although “we came, we saw, he died” will never not be the profoundly psychopathic statement of a war criminal), because the moment she told people that things were OK, they knew she was lying. Things are not OK. People know that.

So just look at the situation that the mainstream political forces have created. They don’t allow anyone to think in systemic terms, to question why capitalism is not producing widespread wealth as it once did (to some degree). They present them with a binary choice. One option says that everything should continue as it is. The other says that change is necessary.

That’s not why Trump won. But it is why many people who have absolutely nothing to gain from his presidency voted for him. Because they know – objectively – that the system isn’t working. They know it needs to break, to be shaken up, to change in some profound way. They lack the political education to understand how capital functions in times of crisis, but they know something needs to be done, and even inside the framework offered to them by the opposition (there are two capitalist parties and you must pick one), it makes sense for them to support the candidate who at least has the right premise. They don’t need to be racists or homophobes or misogynists. There are immigrants who are pro-Trump. Trump has gay supporters. Plenty of women voted for him. But just like many people held their noses and voted for Clinton, because although they disagreed with many of her policies (especially her strongly pro-war history), they thought she at least got some of the social basics right, plenty of people held their noses and voted for Trump, because at least he got the economic basics right.

Just to be clear, I’m not saying that Trump does actually represent anything anti-systemic. Of course he doesn’t. If anything, he’s a part of the plutocracy seeking to bypass the traditional managerial political class and seize direct control. But looking at the facts above, from the perspective of certain people, he may well have seemed like the lesser evil, or even like a tiny sliver of hope.

Speaking of hope, if you think of Obama, it’s not hard to understand Trump’s appeal. Obama’s first campaign really disproves the liberal narrative which depicts the majority of poor Americans as reactionary hicks. Obama, a black man with a foreign-sounding name, who campaigned on a pro-worker and anti-war message, drew an incredible amount of support and enthusiasm from all over the country (and beyond). That Obama, the Obama of Hope and Change, was what Americans really wanted. Not racism, not sexism, but someone who acknowledges the great problems that plague society and promises to do something about them.

They never got that Obama, of course, and so the enthusiasm waned. Some of it came back during the Sanders campaign, but he was pushed aside in favour of Clinton. But Clinton did not run as the Obama of Hope and Change, she ran as Realpolitik Obama. She ran as a proud representative of a system that has left the majority of people behind. It is not a coincidence that polls showed Sanders winning decisively against Trump. People want change.

Trump’s campaign, on an abstract but important level, resembled Obama’s campaign more than Clinton’s did.

If one thing is characteristic of mainstream liberalism worldwide, it is a rabid anticommunism. Inequality can only ever be condemned as insuffiently equal access to market forces; exploitation, in the sense of the appropriation of surplus value, cannot be questioned. The struggle can only be conceived as the effort to create a capitalism whose results are not distorted by prejudice, creating a ruling class that is as diverse as the general population. Capitalism is holy.

For decades, there has been a global liberal consensus, best expressed in Fukuyama’s idea of capitalism as the end of history. Now, as capitalism sinks deeper and deeper into a crisis it cannot recover from, more extreme forces are necessary to maintain the economic and political status quo. They are the exact same forces the system deployed last time a major crisis occured: various flavours of fascism and authoritarianism, ideal for suppressing dissent caused by inequality and perhaps even jump-starting capitalism through all-out war.

The bitter irony for those who value liberalism’s social values, which will be sacrificed to ensure the division of working-class people as the role of capital becomes more openly dictatorial, is that it is precisely liberalism’s dogmatic insistence that there is no alternative to its own brand of socially-acceptable capitalism that enables the rise of fascism.