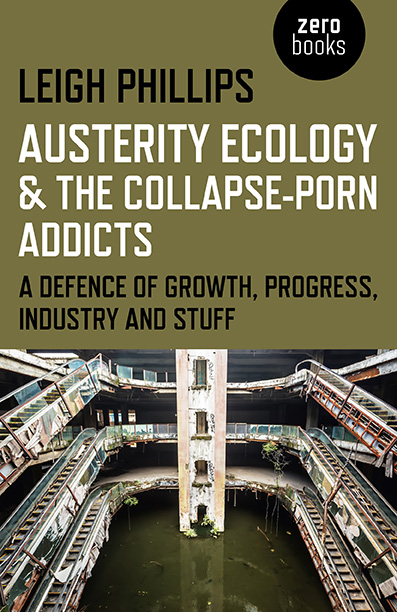 I’ve been struggling to articulate just why this book is so tremendously important – not because it’s hard to talk about, but because it’s just so full of utterly vital ideas and arguments. I want to see this book in every library and on every political reading list. If you have even the slightest interest in technology, civilization, and the environment, then this is essential reading for you. It’s not only the best book I’ve read about the climate crisis, it’s also an urgently-needed work of (political) philosophy.

That climate change is a huge and terrifying issue is something that more and more people are becoming aware of. But how do we respond? Forget about the people who pretend the problem doesn’t exist for a moment. The problem exists – but what is the solution? In liberal/leftist circles these days, the answer is frequently personal, small-scale, and anti-technological. We need to change our personal habits, the argument goes. We need fewer gadgets, fewer products. Everything has to be more local and “natural” (the latter, of course, a term with absolutely no scientific or philosophical basis, as it’s impossible to exist outside Nature). Frequently this is combined with a deeply flawed critique of “capitalism” – which here doesn’t refer to relations of production, but to a vague, moralistic opposition to “greed” and “consumerism.”

First of all, there’s the very simple question of effectiveness. Can we really stop climate change through individual action? If “we all cared just a little bit more,” would that make a difference? If we all recycled and drove hybrid cars and went vegan and only bought local and organic, would that solve the climate crisis? And the answer is a clear and simple no. That’s not a matter of ideology. Nor is it a matter of “at least doing something.” It’s a matter of mathematics.

It just doesn’t work. It’s nowhere near enough. It doesn’t even scratch the surface of the problem.

Already, this conflicts with what a lot of people want to believe. That’s odd, actually, because the same people who will invoke the work of climate scientists when trying to convince denialists have a great deal of trouble accepting the rest of what the numbers show us: current tactics are not even coming close to the necessary goals, and all the lifestyle changes in the world won’t make enough of a difference. Partially that’s because the scale of the problem is so immense, and partially – and this is another fact that makes many leftists uncomfortable – it’s because a lot of supposedly “ecological” solutions simply don’t work. In fact, much of what is praised as “green” is actually massively counterproductive.

A particularly effective example is Germany’s so-called “Energiewende” – a turn away from nuclear power, the bugbear of environmentalist activists, which has resulted in a significant worsening of Germany’s impact on global warming. Just because something sounds “natural” doesn’t mean it actually helps.

(In fact, just talking about nuclear power as a possible solution, especially with recent advances that make it much safer, is guaranteed to rile leftists up in a way that is distinctly reminiscent of religious fanatics getting angry about abortion or other taboo topics. The same goes for genetic engineering, which the book demonstrates has many applications profoundly relevant to improving global quality of life and protecting the environment, but which has become a taboo so strong that people are willing to kill over it. I think this reveals a lot about the antimodernist position.)

With every point that he makes, Phillips goes into detail and provides extensive citations. This isn’t some careless dismissal – although at times the writing cannot help but become sarcastic – but very solid argumentation based on decades of climate research. The book does not challenge the idea that the climate crisis is important; it doesn’t want environmentalists to abandon their struggles. What it does is carefully look at the known facts and ask: do you really want to solve this crisis, or do you want to feel good about yourself through lifestyle choices? Because if you really do want a solution, this isn’t working, and more of the same won’t make a difference.

So where does that leave us?

This is where the bigger questions come up. We are forced to deal with a problem on a huge scale that our current civilizational structures cannot overcome. Small-scale solutions are largely either ineffective or counterproductive.  We can’t keep going as we are. The road diverges: do we reject civilization, or do we embrace it? In other words, do we reject humanity, or do we embrace it?

Those familiar with my writing will know that there’s a text by Albert Einstein – “Why Socialism?” – that I greatly admire. In it, there’s a passage that I’ve always found particularly relevant to the modern day:

Innumerable voices have been asserting for some time now that human society is passing through a crisis, that its stability has been gravely shattered. It is characteristic of such a situation that individuals feel indifferent or even hostile toward the group, small or large, to which they belong. In order to illustrate my meaning, let me record here a personal experience. I recently discussed with an intelligent and well-disposed man the threat of another war, which in my opinion would seriously endanger the existence of mankind, and I remarked that only a supra-national organization would offer protection from that danger. Thereupon my visitor, very calmly and coolly, said to me: “Why are you so deeply opposed to the disappearance of the human race?”

I am sure that as little as a century ago no one would have so lightly made a statement of this kind. It is the statement of a man who has striven in vain to attain an equilibrium within himself and has more or less lost hope of succeeding. It is the expression of a painful solitude and isolation from which so many people are suffering in these days. What is the cause? Is there a way out?

The attitude at which Einstein expresses shock here is one which the book is designed to oppose. And the truly sad thing is that this is not an attitude common to the Right. Even Ayn Rand, miserable old hypocrite that she was, did not embrace such a nihilistic view of humanity. In fact, I’m guessing it’s Rand’s devotion to the ideal of a heroic humanity (if in an utterly antisocial way) that draws many enthusiastic people to her work. No, such misanthropic statements are actually a fairly common element of the modern Left. A postmodern Left that has not just abandoned but renounced the Enlightenment, and with it any belief in human beings and their ability to solve problems. A Left that is not just technophobic but, in its sanctimonious opposition to the vital human activities of consumption and growth, downright puritanical.

Why is it, Phillips asks, that the Left, which once stood for a vision of a better world in which humans used their ingenuity for the benefit of all, is now telling us that we need to do less, to reject the things that bring us joy, to go back to the land, back to some ill-defined Golden Age, to give up the incredible things our species has accomplished in its short lifespan in favour of merely subsisting?

Of course, many would scoff at this “archaic” idea of progress, claiming that humanity has never accomplished anything good, that we are merely a scourge. Here, too, Phillips uses an actual scientific understanding of the history of our planet to put things into perspective. Human beings are hardly unique in their destructive capabilities; everything on Earth, down to the air you’re breathing, is the result of life’s relentless terraforming. What we’re doing is completely normal. Where human beings are unique is in our ability to understand all of this – to make sense of the world, and to change it purposefully. (That, of course, and everything else that comes with our intelligence. Millions of species kill others, even to the point of extinction, but we’re the only ones writing books and making movies.)

This isn’t just about philosophy, though. Phillips makes a very strong case for our ability to solve problems through large-scale planning simply by demonstrating that there are loads of examples of humanity succeeding at it. If you set aside the anti-human and anti-technology point of view for a moment, if you just look at us as another species – like ants, say, who also like to build – then you can see that the things we have created are absolutely stunning. And they work, even when so many catastrophists claim over and over that they won’t. For centuries now, all the predictions about how humanity couldn’t solve its problems, how we’d all starve or die of diseases or be struck down by the gods, have been proven wrong. And though many problems exist, people do largely lead better lives now. Those who claim the opposite generally fail to understand the amount of human misery that existed before industrialization, or the effect of technological modernity on social freedoms (like women’s equality).

Small, Phillips argues, is not beautiful. Small is a reactionary fantasy that’s closer to right-wing survivalist bullshit than to anything in the history of the Left. What’s beautiful is humanity working together to survive, to expand, to grow.

Which brings us back to capitalism. A lot of environmentalists claim to be anti-capitalists, but their definition of capitalism, as mentioned above, is usually quite hazy. Their positions frequently end up amounting either to an ineffective social-democratic liberalism or to primitivist anarchism, neither of which is capable of dealing with the true extent of the crisis. (Nor, as we can see all too clearly, is capitalism itself, stifling innovation with its focus on profit and failing to organize its efforts on a large enough scale.) Phillips instead argues from a classical socialist perspective: the problem isn’t that capitalism is immoral, but merely that it is outdated. The structural and technological tools it has provided us with are not unnatural. They simply need to be used correctly.

There is a long history that shows we are capable of it, and a serious scientific argument that shows embracing modernity is not just the way to a better future, but the only way to save the planet.

If I have any criticisms to make of the book, they have nothing to do with its content, but with its production. The book could’ve used better proofreading, and the print edition is entirely too expensive. I’d probably recommend getting the ebook edition, although the paper version is fine otherwise.

All in all, though, like I said in the intro, this is essential reading.