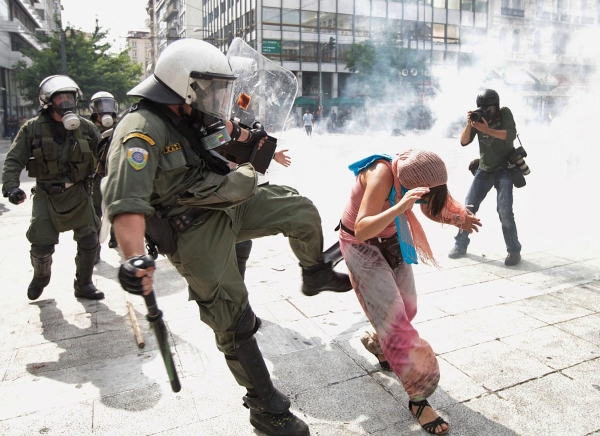 I’ve been seeing a number of English-language debates about police violence lately, particularly due to the events in Ferguson, Missouri. Most of the American debates seem to focus on matters of race, as American debates inevitably do. Now, there is no question that there is plenty of awful racism in America, and more than enough in the rest of the world as well. And there is no doubt that race plays a part in how violence occurs in America. But even in the more progressive parts of American public discourse, there is a tendency to myopically fixate only on the United States, as if the rest of the world didn’t exist or wasn’t part of the same political and economic systems.

A slightly wider perspective will reveal that police violence has been massively on the rise all over the world. For example: tomorrow, the sixth of December, is the anniversary of the unprovoked police shooting of Alexandros Grigoropoulos, a 15-year-old boy, which sparked protests all over Greece in 2008. Those protests, like all those that have followed against the increasingly catastrophic conditions caused by an economic and political system that seems utterly out of control, have been met with extreme police violence. The same is true in Spain, Turkey, Egypt, Mexico, England, even Germany – any expression of dissent is punished with extreme violence by unaccountable and increasingly militarized police forces. 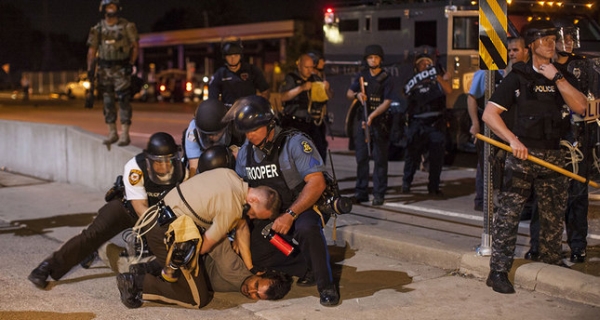 But if it’s happening everywhere at the same time, it can’t just be about the specific cultural parameters of American society. Again, let me be perfectly clear: racism plays a part in this situation. It’s not a coincidence that fascist organizations like Golden Dawn have so many supporters in the Greek police, and poor immigrants are frequently the first victims. But look at that sentence again: there are two adjectives there. The one is what Americans call “race” (a term that most people outside the US associate mainly with Nazis – in a global context this should include a variety of concepts of national/tribal/cultural categorization) and class, a term that is avoided like the bogeyman in all American discourses.

A careful look at the victims of police violence – random people going about their lives, protesters, journalists, the mentally ill, children playing with toys – shows that race is not the major common factor. Certainly not in a global context, but even in the US context alone there are many horrifying cases of unprovoked violence destroying or even ending lives of poor “non-Other” people. There is one major common factor, however: such events do not affect the rich. You’re not going to get shot down if you live in a wealthy neighbourhood. The elites do not have to worry. The further down the economic ladder you are, the more your life is in danger.

However, I want to stress that the social element of this problem cannot and should not be reduced to classism, though it undoubtedly plays a major role. (Belonging to certain perceived identities makes you a criminal, a punk – and makes the perpetrator think they can get away with it. If they thought you had the budget to afford good lawyers, they might be a lot less likely to bother you.) We have to make a distinction between class and classism; between socio-cultural processes and the economic processes that underlie them. The former take a different shape according to the history of each country, but the latter are global: they’re part of one interconnected economic system. 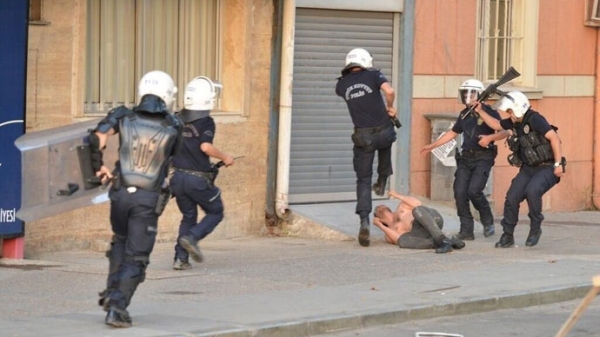 The fact that police violence has become so ubiquitous, that so many states find it necessary to start a process of militarization and surveillance previously inconceivable in supposedly democratic nations, at the same time as an unending global economic crisis is used to justify a massive transfer of wealth from the masses of the population to a tiny elite, is not a coincidence. As the gap between the rich and the poor grows to the point where life for the masses becomes unbearable, capitalist states are tasked with finding methods of protecting the economic interests which they represent.

Drawing parallels to similar processes in the 1930s is hardly inappropriate, and it is precisely because we know where such processes tend to lead that we must urgently draw a connection between these events on a global scale. That cities like Ferguson, Athens, Istanbul and Cairo are treated as war zones by their own governments shows us that we do all have something in common: our position in this global system of exploitation. These are not separate, localized incidents caused by cultural problems. They are the symptoms of a deeper crisis that threatens all of us, and it’s only through solidarity on a global scale that we have any hope of finding a solution.