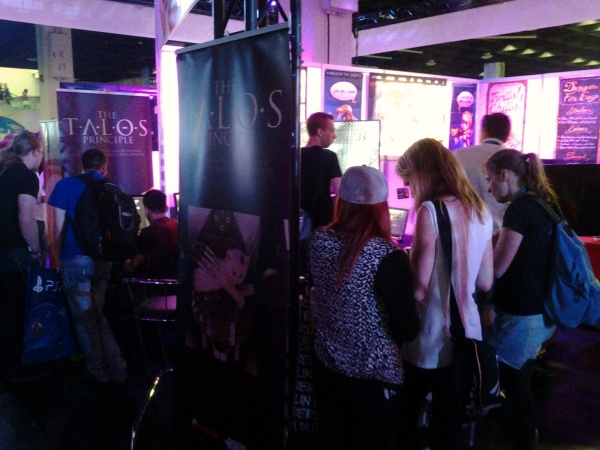 The best moment at Gamescom was a little boy playing The Talos Principle and turning to his mother to say “This is so awesome!” The second best was someone who was already trying to decipher the secrets of the plot, just from the demo.

There are other important things to mention, though. Like the fact that the guys at Croteam are just great. They love making games, and they’re very good at it, but they’re also just fundamentally nice people. They care about The Talos Principle just like they care about Serious Sam, doing their very best to make it as fun and polished and interesting an experience as possible, both for the people who want to dig deep into its philosophy and science fiction and for those who just want challenging, enjoyable puzzles. They’re the opposite of all the horror stories you hear about the industry, and have more “indie spirit” than many a one-person team.

I was also incredibly happy to meet a whole bunch of wonderful folks at the Adventure-Treff party – people I’ve known online for over a decade in some cases, people I’d call friends, whom I’d never met in person before. Turns out they’re even more fun to be around than I thought.

The only sad thing was that I was so busy with telling people about The Talos Principle that I didn’t manage to go play Risen 3, which Verena tells me is really awesome. Ah well. There’s lots of cool games to look forward to in the next few months.

And now I’m in Greece, ready to focus on finishing my novel. I can still be reached via email, but I might be a bit slow to respond. (See this post for Lands of Dream news.) I hope you’re all having a good time. Be safe and remember to read a good book every now and then. Me, I’m going to continue reading the new Frankie Boyle, Scotland’s Jesus. There are jokes in there that would make easily-offended people’s heads explode, but it made me giggle with delight even during the flight here, and if you knew how terrified I am of flying, that’s saying something.

Anyway. Off I go to write more words.