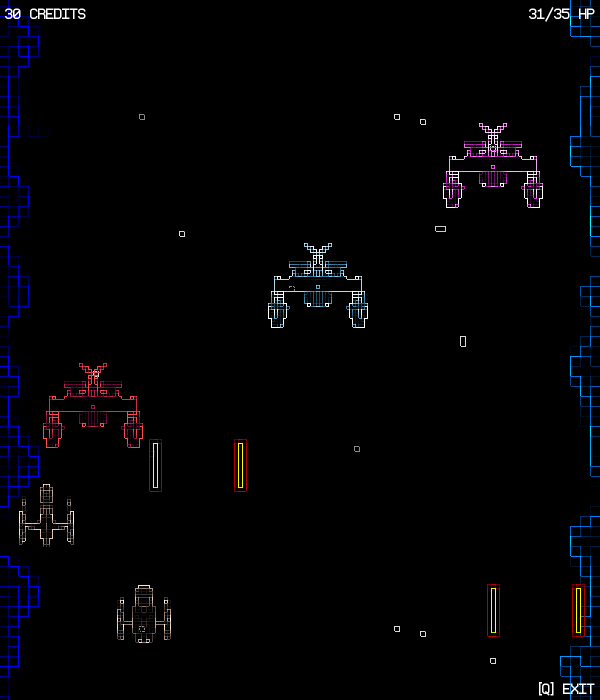 My latest game, Traitor, has just been released. It’s a casual shoot’em up set in a universe not quite like ours. The music, which rocks, is by Chris Davis.

Some thoughts about the game itself:

Traitor is what you might call a casual game. Its focus is on that simplest of formulas: do a mission, upgrade your ship, do more missions, upgrade again. It has this gameplay because I enjoy this gameplay. Not because I think it’s all that games should be, but because it’s one form of gameplay I genuinely enjoy. Some people may find this doesn’t fit with their idea of the indie ethos – Traitor doesn’t innovate. Or at least it doesn’t innovate in terms of gameplay. It’s not some mindbending, chaotic bullet hell game, it’s not the-shooter-as-visual-art. It uses a fairly common formula, because I like that formula.

But if I like that formula, I dislike what so many games do with it, or rather what they don’t do with it. I like spending a couple of hours upgrading my ship and blowing stuff up while collecting achievements, but I don’t like it when there is no meaningful context to this gameplay. Perhaps it’s the same reason I love strategy games but chess doesn’t really do it for me: I like narrative, even if it’s only worldbuilding. And that’s where Traitor is different from many similar games, at least to me personally. There’s a world in this game. There are themes and ideas; you may be doing the same old missions, but you’re doing for them for different reasons.

I might elaborate further on how I designed this game at a later date. For now, the Aventinus Complex awaits.

[My very special thanks to: Tom Fulp of Newgrounds for sponsoring the game, Mike Welsh of Newgrounds for helping with API stuff, Jonathan Chung and Cole Forrester at Stencyl for helping me prepare it for publication, and Richard Perrin for taking the time to help me track down a bug. I’m very grateful to you all. And my thanks to everyone who playtested the game for me, especially Verena, who is by now probably sick of seeing it.]