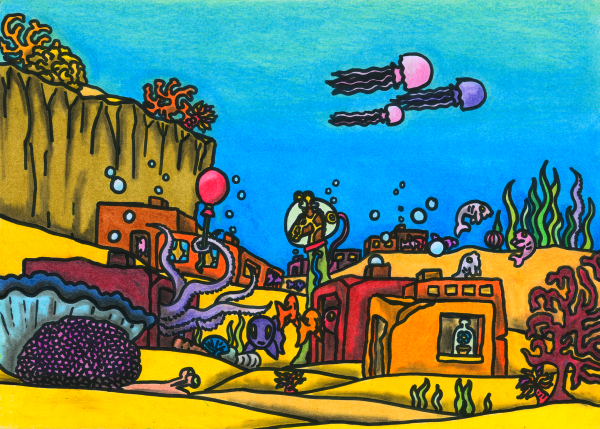 There is a city in the depths of the sea, built measureless aeons ago by forces unknown, that is called by the name of R’lyeh. Many stories are told about it, and many terrible moments of its history remembered, but too few now have a clear understanding of its nature and its denizens.

The city’s beginnings, as noted above, are lost to history; in fact they may predate history as we know it. Its houses, made of beautiful stones of varying colours, have been a treasured home to the diverse creatures of the sea for uncounted centuries. R’lyeh has inspired poets and painters alike. There is nothing quite like the way the light of the sun, when the sea is calm, falls gently on the sandy plains below the Mustardy Cliffs as varicoloured jellyfish float above. Visitors from foreign lands always marvel at the unusual colours of the city, at the dreamlike proportions of its architecture.

The city’s most ancient and respected inhabitant is the creature known as Cthulhu, though that name is only a slight approximation of its true name. Cthulhu is the heart and spirit of the city – some even say he is its founder and builder. But none know, for none are entirely certain as to what Cthulhu himself is. The most common belief is that he is one of the Ancient Gods of Outer Darkness who came to live upon the Earth, though the old folks of R’lyeh say that he was already there when the Ancient Ones arrived.

What is certainly known of Cthulhu is that he loves colours, and interesting shapes, and delights in swimming and splashing about. He loves playing with bubbles and observing the silly games fish play; and most of all he loves to settle down to sleep after a long day of games and adventures, and dream of things so strange and wonderful the human mind can barely imagine them.

There was a time, however, when R’lyeh became an entirely different city, a time that stands out like a dark stain in its bright history.

The decline began when a group of fish-beings, often called the Squelchini, began to worship Cthulhu. None had done so before, for his true nature is too strange and wild and silly to worship; but the Squelchini were not concerned with his true nature. Cthulhu, they proclaimed, was a Supreme Being, an avatar of the Infinite Darkness and the Perpetual Grey. His purpose was to obliterate all that is improper in the world: all colour, all sexual delight, all instrumental music. Cthulhu was he who has come to reveal that all is meaningless except the worship of Cthulhu, that all is worthless except faith in Cthulhu. To spread that faith and enforce its principles, they formed the dreaded Moral Reform Committee.

The Squelchini built temples in R’lyeh, and raised statues to Cthulhu on every square. These statues were utterly monstrous, for none can capture the alien grace of Cthulhu as he swims in the Abyss, so the Squelchini declared that all beauty was an affront to Cthulhu, and began to refashion the entire city in the image of their own incompetence. Visitors recoiled in terror at this nightmarish corpse-city in which all the higher pleasures of life were forbidden. One by one the original inhabitants fled to the deeper places of the ocean, unable to adjust to the dreariness, until only the Squelchini remained.

The propaganda of the Moral Reform Committee began to affect Cthulhu himself, and slowly he became the kind of creature they imagined him to be: the Messiah, the Sole Purpose of Everything, whose very existence drained the world of meaning and light. Squelchini were sent out to other underwater cities to proselytize, and the cult of Cthulhu grew.

A long time passed. The power of the Moral Reform Committee became absolute. Finally they declared that Cthulhu’s true purpose was to reign above the sea, in the Land High Above where his Eternal Kingdom lay. So they chanted for Cthulhu to raise the city above the waters, and he did as they told him that he commanded. Immense waves formed as the earth shook, and R’lyeh ascended.

Cthulhu was confused. His worshippers were all gone, and though he could breathe air, he was not very fond of the cold and miserable place where he had ended up. Had he fulfilled his destiny? Was this his kingdom? He waited for a sign, for some kind of revelation, but there was nothing, so he decided to take nap. Centuries passed as Cthulhu waited in his house in R’lyeh, dreaming.

When he finally awoke, he was disappointed. It was still cold and unpleasant, and he missed his colourful fish-friends. Maybe he didn’t want to be the Messiah after all. Maybe he just wanted to swim and play and observe the infinite patterns of the light.

So he went back to the sea, and took R’lyeh with him. And slowly, carefully, he removed all the nonsense the Squelchini had built, and rebuilt what they had destroyed. It took many human lifetimes until everything had been restored, but Cthulhu is patient. In time he was joined by such of the original inhabitants of the city as still lived, and the descendants of those who did not, and life returned to the once-dead city.

The scars have never quite faded, and there is a fear in the modern city that never existed in the old days – an awareness of how easy it is to fall, how quickly madness can take over. The citizens of R’lyeh know that the lives of our cities are in our hands, and that if we forget to nourish them with beauty and delight, they will become monstrous and turn on us. And I think that is not such a bad thing to be afraid of.

This entry in the Oneiropolis Compendium was made possible by Melissa and Gregory Avery-Weir, of Irrsinn.net and Ludus Novus.