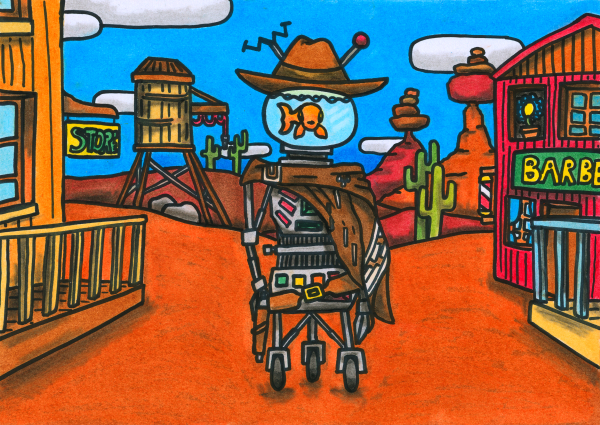 Nobody knew much about the Fish With No Name. Some said he was from a faraway place called Illinois, but that’s all anyone had ever heard about his background. He rarely spoke; mostly because he had no vocal cords, communicating instead via mime. Sometimes people called him Goldie, but that was just a nickname.

His adventures had long since become folk tales and legends. He strode across the history of the west like a mysterious shadow, playing gangs against each other, chasing down wanted men, taking out anyone in his way. His duel with Angel Fries, the greasiest of criminals, had already been depicted in films, songs, even in epic poetry.

Given these facts, and the moral ambiguity of fish being a subject as old as philosophy itself, it is not surprising that the Fish With No Name had tracked down Billy the Squid. After all, the reward was good and the job seemed easy enough.

So there they stood, in that dusty little town in the middle of nowhere, two gunslingers facing off under the scorching midday sun. Who was the faster draw? Who would live, and who would die? Billy the Squid had unmatched agility, but Goldie had the perfectly optimized killing machine that was his body. Who was going to come out on top?

The squid and the fish stared at each other, both strangers to these lands, both having little to lose but their lives. The wind blew. Mumbleweed rolled by, muttering to itself. People hid in their homes, afraid of being accidentally shot down. You could cut the tension with a knife, if you had a tension-cutting knife.

Billy didn’t want to shoot. He’d killed before, but only reluctantly. He had no hatred for the fish. The fish had nothing to do with the tofu ranchers. Besides, he was certain the bounty hunter was better with a gun.

But the fish didn’t move. It squinted mysteriously, observing Billy. The doors of the saloon creaked. The mumbleweed muttered something about noise pollution.

It could’ve gone either way, really. Death walked the desert that day. The air smelled of murder.

The cavalry arrived just in time, like it does in the stories. But what the stories forget to tell you is whose side the cavalry was on, whose side it’s always on. Urizen’s men, mounted on their mechanical horsautomatons, were there to make an example of the town’s citizens for refusing to bow to his demands. They smashed windows, set fire to houses.

And then they made the mistake of shooting at the Fish With No Name.

“That is one vicious goldfish,” the mumbleweed said.

Billy the Squid and the Fish With No Name joined forces that day, which was just about the last thing anyone had expected. As has happened so very often, Urizen’s attempts to gain power created new forms of resistance.

The days that followed were tumultuous. The gunslingers waged bloody war on Urizen’s troops, throwing his plans into complete disarray. Many saw them as heroes, but when it turned out that Goldie was actually female, and the two began an unconventional cross-species relationship, they lost many of the supporters they could previously count on. Some ignored them, others angrily denounced them. The only question, some said, was what was worse: a female gunslinger or the possibility of miscegenation?

Goldie and Billy fought like hell. Rarely have two people alone caused such carnage amongst their enemies. Urizen’s commanders feared them, and rightly so: Goldie and Billy made a contest out of how many commanders they could take down. Urizen had to recruit new officers.

They were magnificent in their fight against oppression. Even the people who hated them for their inappropriateness were in awe of them.

In the end they lost, of course. Two people alone cannot win a war. A priest of the Brotherhood of the United Monotheistic Sacrament ratted them out to their enemies. They were surrounded in a small dusty town in the middle of nowhere – they very same one where they had first met, as chance would have it – and gunned down. Their bodies were left to rot in the sun as a warning to those who might follow their example.

When people came out of their homes after the soldiers had left, they found a dead squid gently cradling the broken remains of a fishbowl.

This entry in the Oneiropolis Compendium was made possible by Terry Cavanagh, the kindest eyeball in the Lands of Dream.