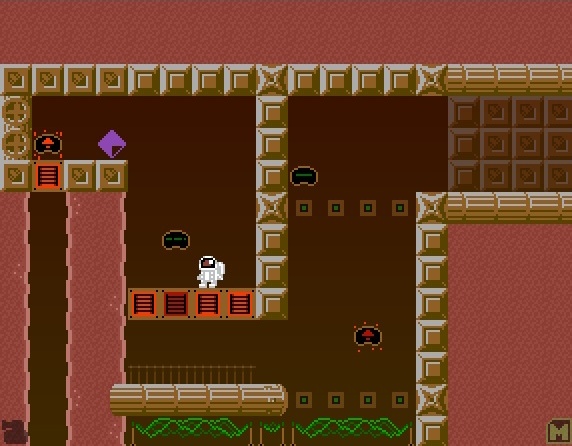 Redder, the new Auntie Pixelante game, is an exercise in storytelling through visuals and gameplay.

A nameless astronaut is travelling through space, when he/she/it has to crashland the ship on a red planet. Apparently the ship is out of crystals, and new ones need to be gathered on the planet.

But collecting these gems has unforseen consequences, in a way that I’ve always wanted to do in a game myself. (Damn.)

Redder is a very simple game. You can walk. You can jump. There are red and green blocks that can be turned on and off. And there are things that kill you if you touch them.

That’s it. That’s all Anna Anthropy uses to construct the story of Redder. The result is a remarkably clean and effective game that’s really quite absorbing and memorable. The level design is thought through to a remarkable degree – the whole gameworld is like a complex interlocking puzzle, but still allows free exploration and multiple approaches. The difficulty is also just right; save points are frequent, and failure usually has more to do with not thinking than with jumping challenges.

But I said “story”, and I meant precisely that. There’s not a word of dialogue in the game, but true storytelling doesn’t require cutscenes and NPCs that explain the plot. Cutscenes and NPCs, like everything else, are tools. I don’t subscribe to the idea that gameplay is the only legit form of storytelling in games, but using only gameplay is certainly legit. And here it works really well: every time you enter a new area, you wonder what it is, who built it, and what you’re going to find there. The graphics and the music, both excellent, help build an atmosphere of mystery and menace. And as the game progresses, more questions about what you’re doing and what it means start to pop up.

The game never really answers any of these questions, because it can’t – it doesn’t use words, after all. It just shows you images and lets you play through environments, and lets you draw your own conclusions. Besides, in this game, it’s the journey that really matters.

I found myself quite frustrated by some people’s reactions to Redder. For some, it wasn’t their cup of tea, and that’s OK; but others seemed to go out of their way to be stupid about it. It seems to be getting increasingly hard for people to play a game without comparing it to other games, and they only understand a game in terms of other games – “oh, clearly you based this game on Attack of the Seminude Mars Vixens II: Braless Invaders for the Atari” or “this game is exactly like Red Planet Monkey for the SNES but it doesn’t have the shit-throwing mechanic so it so sucks”. Instead of letting the creator of the game take them on a journey, they immediately look for specific features. If these aren’t there, it’s a bad game. And sometimes they just decide what features the game has from playing it for about ten seconds.

And what is it with always demanding “innovation” from every game? What makes a game good is thought-through specificity, not the newness of its features. Redder would not have been improved by a chicken-strangling minigame, or a punk goth taxidermist protagonist who spends cutscenes decorating his mustache with streaks of vanilla. That would be something new, but that doesn’t mean it’s appropriate or good. The Lord of the Rings will still be a great novel in a thousand years, whereas most “experimental postmodern novels that challenge the grand narrative of the existence of narratives by cleverly juxtaposing meta passages with the fragmented story of the incestuous relationship between an upper middle-class professor/author and his imaginary bodyguard, Clive” will have been forgotten.

Anyway. Redder uses a simple but flexible vocabulary to create a truly interesting experience, and I liked it a great deal.

(Note: the game is challenging in its geography, so it can get tiring after a while. I played it in three portions, and that worked really well. Since the game remembers your progress, no-one is forcing you to play it in one go. So if you need a break, take one, and don’t complain about the game.)