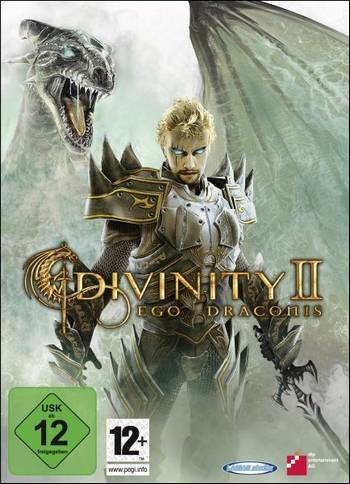 Note: Verena and I are playing this game together, even though it’s a single-player game. You can read Verena’s review here.

Remember how in the podcast I complained about the lack of good RPGs? Well, exactly one day after I recorded my complaint, we bought Divinity II: Ego Draconis.

And, it’s good. Not perfect, but pretty good. We haven’t finished it yet, so I can’t give a full opinion, but we’ve played enough for me to be able to say a few things.

Let’s start with the negative, to get that out of the way.

I intensely dislike the way the engine makes the graphics look. The graphics themselves are perfectly well-designed, if only rarely inspired. But the engine – which reminded both of us of Gothic III, which is not a good thing – somehow manages to make everything look flat, and it’s very hard to recognize details. (Yes, my computer can handle the game pretty well. But my computer is a bit of a monster.) It’s a shame, really, because many of the locations are very impressive.

I’m also a little unhappy with the world. Not in terms of design, but in terms of worldbuilding. There’s plenty of detail, but it’s basically all a bunch of fantasy clichés – or at least that’s what it looks like so far. There are some bright points, which I shall mention later, but in general I could’ve done with more originality.

There’s also something of a tendency to have really stupid jokes that refer to things in our world. Some games can afford that kind of humour – like Fallout 2 – because of their setting and mood. This game cannot, and it really damages some of the quests.

Finally, combat works but is a little uninspired. The various combat-related abilities are interesting and useful, and the balance is excellent, but it’s not terribly exciting. But then, very few RPGs ever manage that. (Dark Messiah of Might & Magic should be obligatory playing for every game designer from now on.)

On the bright side, the game has a lot of very cool features, and is really well-designed. The world is open – if a tad too linear for my taste – and you can go wherever you wish in whatever order you wish. At some point, you get your own tower, and a group of people to work with you (or serve you). You can use alchemy, improve your weapons with magical thingies that you find, and enchant items. You can turn into a dragon. And you can necromantically construct your own pet undead.

That feature is probably the coolest in the game, even cooler than turning into a dragon. I think this is the first time that I’ve seen an undead monster that is actually cute. And it is. It really is. Like a cute puppy, only more dangerous. And undead. Great fun.

There are some other cool creatures, too, like the goblins. While their basic concept is the same as with most fantasy worlds (“Evil Natives”), their visual design is entirely unique, and I wish the engine would allow the player to get a better look at them.

The music is also very good. It really helps to set an atmosphere, and it’s a lot more varied than the five and a half pieces of music we got on games like Morrowind and Oblivion. Sometimes it even reminds me of Gothic II, which is a great compliment, since Gothic II is one of my favourite games of all time.

Speaking of Gothic II, Divinity II has another great feature in common: vertical space. So many games these days are so incredibly flat, giving the player no climbing abilities whatsoever. This results in the games totally lacking a sense of scale (and of grandeur). Divinity II gets this right, for the most part, and I like that very much. I do wish there were more non-combat skills, but that kind of RPG is hard to find anymore.

I also quite like the skill system. Skill points are hard to come by, but that makes them meaningful – Bethesda could really learn something from that. All the skills I’ve used so far are also quite useful, and different enough from each other to make choosing really interesting. The same goes for equipment and other items – the game provides enough variety to make it all quite interesting.

As for story and writing… well, I’m not entirely sure. The writing is good on average, and occasionally brilliant. The story is more focused and feels better-realised than in Divine Divinity, the game’s predecessor (and winner of the award for silliest game title ever), but so far isn’t particularly full of originality. Still, it’s interesting enough to motivate me, and it’s never made me cringe like The Witcher did. The various dialogues with NPCs are well-done, both in terms of writing and of design, giving you distinct characters and multiple ways of solving quests. Also, you can read people’s minds, which makes you feel like a Jedi.

In the manual, we’re told that one of the main design principles of the game is to keep providing you with new gameplay options throughout the game and to avoid grinding-type gameplay. From the few dozen hours we’ve played, my impression is that the designers succeeded very well at that.

So: some flaws, but plenty of interesting content framed by enjoyable gameplay. Recommended!

Another Note: We played this game in German, because it’s not out in English yet. The voice acting is not as brilliant as in Gothic II (what is?), but it’s only made me cringe twice, in the case of two characters who speak with an English accent and are absolutely embarrassingly terrible. I’ll blame the translators, not the designers. Thankfully the characters are extremely minor. Shame you can’t cast spells on them, though. Would love to turn them into ladybirds or something.