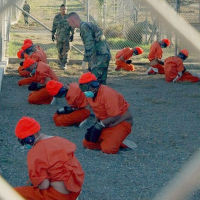 Well, today’s my birthday (and Mr. T‘s). I was going to post about all the cool presents I got (including Christopher Lee’s autobiography Lord of Misrule, An Other Cup and Star Maker) but then I read that the US Senate has voted to block the closing down of Guantanamo.

The night before the vote, Senate Democrats, led by Senate Majority leader Harry Reid, said they would block the funding and publicly broke ranks with Obama. Reid told reporters “Democrats under no circumstances will move forward without a comprehensive, responsible plan from the president. We will never allow terrorists to be released into the United States.”

The Democrats’ capitulation comes after several weeks of terror baiting from top Republicans and the media. In one example, Senator John Thune from South Dakota warned, “The American people don’t want these men walking the streets of America’s neighborhoods. The American people don’t want these detainees held at a military base or federal prison in their backyard, either.”

I find this so profoundly disgusting that I barely have words for it. This is evil and absurd on a level that is just stunning. How can people – and by that I mean the population, not the government – be falling for this shit? We’re talking about 240 guys, of which 200 not even the fascistoid system they’ve set up can actually put on trial. That’s how thin the accusations are. 240 people who have been imprisoned and tortured for years for crimes that they did not commit, with no legal rights whatsoever. Even if two or three of them are potential terrorists, get this:

THEY ARE NOT SUPERVILLAINS.

They’re just a bunch of people who have been abused to the breaking point. They’re not some army of invincible evil-doers that will run amok in the streets of America. (There hasn’t been a terrorist attack in the US since 2001, remember?) Who can really believe that if these guys were released into public life, they would instantly turn into civilian-killing supermonsters? Hell, even if they wanted to, how?

It’s insane, and disgusting, and comes very close to killing off my last bit of hope for America. I knew that the Democrats were spineless, but seeing the military-intelligence apparatus taking over control of the country to so little reaction is just depressing. Where are all the people now who were so enthusiastically supporting Obama and change? Why are the blogs so silent? Was all they wanted a governmental facelift? Their government is bowing to fascism right now – why aren’t people speaking up? Where is the power of the internet? Where are the so-called progressives? If you were all there for Obama, where the hell are you now?

WAKE UP, DAMN YOU!