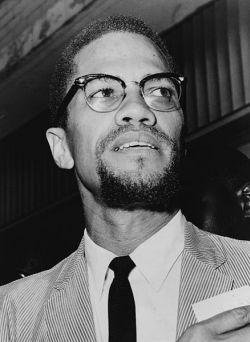 “I am not a racist. I am against every form of racism and segregation, every form of discrimination. I believe in human beings, and that all human beings should be respected as such, regardless of their color.” – Malcolm X

Today is the birthday of one of the bravest and most honourable men that ever walked this planet. A man whose sole belief was in freedom and justice, and whose unwavering commitment to the truth was reflected in the choices he made in his life in order to remain dedicated to that ideal. A man who always spoke his mind, even when he knew it might cost him his life – as it did.

If he was alive today, he would be celebrating his 84th birthday. As things are, he didn’t even get to be forty. And yet, in the thirty-nine years that he lived, he strode the world like a giant. At his funeral, Ossie Davis called him a prince – a shining prince. And that he was – a shining prince, not of black people, but of all people. Of humankind.

That he was murdered changed history. But that he lived, that such a man can be born at all, is something to give us hope.

And today, in his honour, we will go out and eat a banana split ice cream. Because it was his favourite, and because I think it would make him smile. And then we will, as best we can, continue the fight for equality, freedom and justice. Not as some kind of ideological abstraction, but as real and tangible conditions of human life.

See you out there.

“It is a time for martyrs now, and if I am to be one, it will be for the cause of brotherhood. That’s the only thing that can save this country.” – Malcolm X