Two of the films we saw at the Fantasy Film Fest had a similar (and meta) central concept: My Name Is Bruce and JCVD are both about two actors playing themselves in a rather extraordinary situation.

In My Name Is Bruce, a young and somewhat geeky teenager accidentally unleashes an ancient Chinese god (and patron saint of bean curd) bent on revenge. The only solution to this terrible threat he can think of is his icon, the legendary B-movie actor Bruce Campbell. (Who is not only a brilliant actor, but a very good director, too. Good comedy is not easy to pull off.) Bruce, of course, turns out to be a sleazy and stupid coward, and Bruce Campbell has way too much fun playing himself that way.

In JCVD, Jean-Claude Van Damme, broke and in the middle of divorce proceedings, gets caught up in a post-office robbery. To add to his bad fortune, the robbers use him to make the police believe that he’s the one robbing the place.

So, let’s see how the two contestants fare against each other! 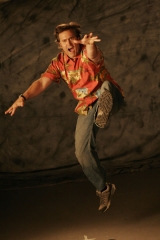 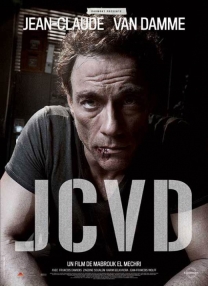 MNIB is directed in an enjoyable, clean way. The photography is simple and lets you concentrate on the movie; pacing, lighting, editing, it all works perfectly. The performances are pitch-perfect, from the major characters to the minor, going for the comedy but rarely going too far. My only complaint is that a few times a sound effect is used when Bruce does something wrong, which is a cheap and unnecessary device and takes away from the performances. Oh, and Ted Raimi, who plays multiple parts, isn’t quite perfect as the Italian painter (though his last scene is hilarious) – the rest of his performances are fine, though, and get plenty of laughs. Those are the ONLY complaints I have about the movie’s direction. That is very good work.

JCVD is “artsy”. The camera is constantly stuck on the actors’ faces. The colours are fashionably washed-out. There are long takes that are supposed to look cool, but feature no content. The annoyingness of a great deal of the performances is mostly down to the writing, so we won’t count it here. But it’s very obvious that the director thought he was making a movie so cool it would out-cool Quentin Tarantino as the king of meaningless coolness. Now, theoretically, making a movie look like this could be fun – especially if you go for the comedy while keeping the visual appearance of a more “serious” movie. But showing us characters we don’t give a crap about endlessly running down streets in a dramatic fashion (or similar “cool” stuff)… when none of what we see actually contributes to any kind of plot… is BORING. Even with the script being as it is, you could have turned this into a halfway decent movie… if you didn’t take yourself and your project so seriously that you become ridiculous.

In round one, a pretentious movie gets the crap beaten out of it by a well-made comedy. MNIB wins.

MNIB features fantastic acting. I mentioned some of it before, as it related to choices the director could have made. But besides that minor flaw it’s all fantasic – and surprisingly, it’s more than just The Bruce Campbell Show. It’s The Bruce Campbell Show With Some Cool Supporting Players. Most of the other characters, with the exception of Ted Raimi’s three, are played straight, which adds to the comedy. As for Bruce Campbell… he’s Bruce Campbell. He plays the part of the dumb, self-centered and cowardly actor with so much dedication that even someone who’s never heard of Bruce Campbell can laugh their socks off. It’s a great performance. (Certain people will, of course, look down upon his acting because it’s “just comedy”. As if comedy was more easy than drama – an absurd notion. Comedy is not just “fooling around” or “being silly”. In comedy, if you miss the right tone, if you miss the right moment, if your body language betrays you or your performance has the tiniest flaw, it immediately becomes unfunny. Making people laugh is an art, and one that is at least as valuable and as difficult as making them cry.)

JCVD himself is good. That is perhaps the most important thing about this movie: Jean-Claude Van Damme can actually act. (I think a lot of it has to do with language. Having him play someone to whom English is a second language is fine. Giving him a shitload of über-cool lines straight out of American slang makes him sound funny. It’s normal.) The rest of the performances are very, very unpleasant. Not bad, per se – just unpleasant. The director apparently believed he was doing Reservoir Dogs 2: Belgium. OK, so maybe that’s direction. There’s nothing on the part of the actors, though, that would help in any way, even though one or two of them seem to be good.

In round two, “artsy” and “cool” perfomances put the audience to sleep while exceptional comedy makes everyone feel better about the universe. MNIB wins.

MNIB features country music interludes about the movie’s main villain. The hilarity of these has to be seen to be believed; truly a fantastic idea that elevates the silliness to a whole new level. You’re likely to still be humming the damn song to yourself days later.

In round three, an uninspired and unoriginal soundtrack gets its (fairly small) heart ripped out through its nostrils by the massed artistic brilliance of people singing about Chinese vengeance gods. MNIB wins.

MNIB is incredibly well-written. Again, of course, certain people (like critics, or pretentious filmmakers) will look down on comedy. Because making up new jokes is so easy, right? That’s why we have so little respect for Euripides and Aristophanes, right? And Aristotle wasted his time writing about comedy? And Shakespeare – total nonsense, right? But that’s different, they will scream. And I ask… how? How is Shakespeare’s making jokes about piss and shit so much different? It’s meant to be funny. It’s meant to make people smile. That doesn’t mean it glorifies stupidity and backwardness like a Farelly Brothers movie will do. And neither does MNIB – which is also funnier than Shakespeare. OK… back to the fight. MNIB is enormously well-written. It plays so delightfully with the whole idea of the B-movie actor against the evil spirit, and the jokes fly in all directions: from the absurd, to the over-the-top violent, to the insanely meta. It makes fun of the film industry, of B-movies, fandom, horror movie plots, and Bruce Campbell, all without being hateful (except about the film industry, and that deserves it). Unlike a lot of movies, the comedy is actually achieved, not just hinted at – that is, the lines are written so that the wording perfectly expresses the joke, rather than just being funny on a conceptual level, which is the bane of most comedy.

JCVD has approximately four funny scenes, the first five minutes being the best. The rest of the writing is repetitive and annoying. Characters spend a lot of time having “cool/funny” dialogue like “Go to the back.” “No.” “I said, go to the back.” “No.” “Go.” “I’m staying here.” “Go to the fucking back.” “No.” “I said go.” “I’m staying.” “Go.” “No.” “Go.” “No.” “Go to the back.” “I said I’m staying.” “I said go.” “No.” “Go now.” “No.” “I said go.” “I’m not going.” “Fuck you.” “Now I’m going.” The audience, meanwhile, wishes it could get its hands on the director and the screenwriter in order to kill them by slicing open their throats with shiny Jean-Claude Van Damme DVDs. The overall problem is that the movie takes itself so seriously. This isn’t a movie where someone had the crazy idea that Jean-Claude Van Damme could be involved in a robbery… this is a stupid Tarantino-esque robbery movie that happens to have JCVD as a minor character. Hell, the whole existence of JCVD in the movie is nothing more than a Tarantino-esque meaningless pop culture reference. And we don’t need more of those, thank you.

In round four, pretentious nonsense gets ground into a fine pink powder by its greatly superior opponent, proving that what looks flimsy may sometimes have more to it than what looks cool and serious.

Hail to the Bruce, baby.