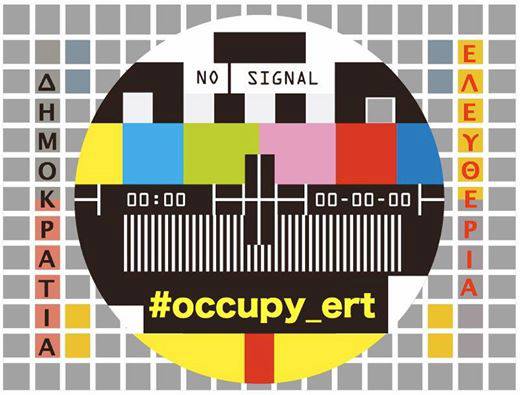 The authoritarian capitalist regime that rules Greece has begun an unconstitutional and profoundly antidemocratic attack on Greek public broadcasting, yesterday announcing that all public radio and television stations were to be shut down by midnight. To understand what this means, imagine David Cameron sending riot police to shut down the BBC – just like that. Thousands of people have taken to the streets to defend ERT.

In recent years, there was a government-imposed culture of silence at ERT, making it almost impossible for any criticism of austerity to be heard. Nevertheless, ERT was the only source of culturally valuable television in Greece and has played an important part in Greek culture and history over the last four decades. Private television, meanwhile, is owned by a tiny handful of media oligarchs who are highly sympathetic to the neonazis of the Golden Dawn and who broadcast little more than hysterical nationalist propaganda, reality TV and other garbage.

Attempts to stop or reverse this disaster are being met with the usual measures of violence and blackmail that the Greek state deploys against any form of dissent.

This is an important moment in the history of Greece and Europe. Greek democracy is already in tatters, but this particular assault represents a new level of shamelessness, and not only a turning point – or perhaps a tipping point – for Greece but also a sign of things to come for all of Europe. Understand: we’re talking about a complete blackout of public broadcasting, without even parliamentary authorization, simply at the command of a single person. This is happening right now, in a European country, and the European Union knows this and supports this. That’s the same European Union which previously imposed an unconstitutional government on Greece, which for the first time legitimized the previously powerless far right.

That’s the future the European Union envisions. The EU is not the cosmopolitan, progressive force so many people imagined it was. The EU is tear gas and riot police and silenced journalists.

Is this the future you want?