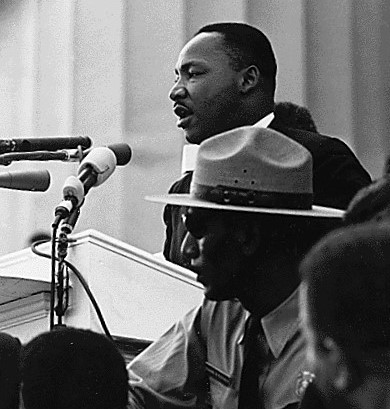 Forty-six years ago today, Martin Luther King, Jr. delivered his famous “I Have a Dream” speech. It remains his most famous speech, and the most famous part of the March on Washington – or, as Malcolm X called it, the Farce on Washington.

“I Have A Dream” is the cliché that people immediately remember when they think of Martin Luther King. They forget his profound disapproval of the capitalist system, his opposition to war, his fight against poverty, or the way he was vilified by the press for suggesting that nonviolence was not only necessary for black people, but for the whole world. They forget that only a few years later, he would be saying this:

In 1963… in Washington, D.C., … I tried to talk to the nation about a dream that I had had, and I must confess… that not long after talking about that dream, I started seeing it turn into a nightmare.

I watched that dream turn into a nightmare as I moved through the ghettos of the nation and saw black brothers and sisters perishing on a lonely island of poverty in the midst of a vast ocean of material prosperity, and saw the nation doing nothing to grapple with the Negroes’ problem of poverty.

I saw the dream turn into a nightmare as I watched the war in Vietnam escalating… Yes, I am personally the victim of deferred dreams, of blasted hopes.

And so I prefer to remember this great man by the words that are much closer to what he believed, to what he fought for, in the years in which his wisdom and understanding had reached the highest point they were allowed, before those who feared him made sure to remove his influence.

We’ve got to begin to ask questions about the whole society. We are called upon to help the discouraged beggars in life’s market place. But one day we must come to see that an edifice which producers beggars needs restructuring. It means that questions must be raised. “Who owns the oil?“… “Who owns the iron ore?“ … “Why is it that people have to pay water bills in a world that is two-thirds water?

And as a reminder that true Christians have walked this Earth, and that the degenerate hatemongers who call for war against the enemies of Christ are not everything that Christianity has ever produced:

Don’t let anybody make you think God chose America as his divine messianic force to be a sort of policeman of the whole world. God has a way of standing before the nations with justice and it seems I can hear God saying to America “you are too arrogant, and if you don’t change your ways, I will rise up and break the backbone of your power, and I will place it in the hands of a nation that doesn’t even know my name. Be still and know that I’m God. Men will beat their swords into plowshafts and their spears into pruning hooks, and nations shall not rise up against nations, neither shall they study war anymore.” I don’t know about you, I ain’t going to study war anymore.

President Obama likes to talk about change, but this is what change means:

I am convinced that if we are to get on the right side of the world revolution, we as a nation must undergo a radical revolution of values. We must rapidly begin the shift from a “thing-oriented” society to a “person-oriented” society. When machines and computers, profit motives and property rights are considered more important than people, the giant triplets of racism, materialism, and militarism are incapable of being conquered.

And finally, as President Obama continues the butchery in Iraq, Afghanistan and Pakistan, and the liberal press continues to have orgasms over the fact that a black man is president, perhaps people should remember these words:

This business of burning human beings with napalm, of filling our nation’s homes with orphans and widows, of injecting poisonous drugs of hate into veins of peoples normally humane, of sending men home from dark and bloody battlefields physically handicapped and psychologically deranged, cannot be reconciled with wisdom, justice and love.

Amen, Dr. King. I hope one day the people of this planet will finally understand what you were talking about, and put an end to the immoral and illogical madness of our political and economic system and the misery and hatred that it produces.

That is a dream worth fighting for.