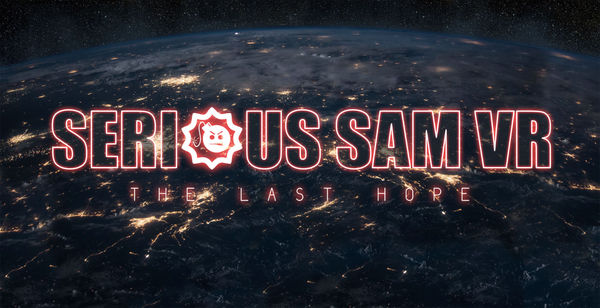 So, hey, Serious Sam VR is out! Verena and I worked on this, so here are some thoughts about writing such a game.

This is the kind of project where you’ll sometimes hear people say “Why do you need writers for this?” And yeah, sure, it doesn’t have a huge storyline or anything. But you’ll notice that it does have narrative elements. It has an overall situation – you’re on a ship, you’re selecting missions – and it has scenarios, broken down into four levels per planet. And it has Sam himself, a highly distinct character who reacts to all this in a specific way (apart from blowing stuff up, I mean; Sam isn’t Sam without one-liners).

In other words, what game writers can provide is context and flavour. SSVR is not a philosophically or narratively ambitious game, and it doesn’t need to be. But those few elements we had to work with – like the level descriptions, or the overall concept of the game – do actually influence the experience, even if the player doesn’t pay much attention to them. Most players only actively notice this when those bits are badly written (or translated), breaking immersion, but they’re always there. They’re not the main attraction in any way, nor should they be. They’re just spices in a big soup. But if you spice your soup with ground-down turds instead of coriander, somebody’s probably going to notice.

From a writing perspective, this was a challenging but enjoyable exercise. When you have so little to work with, and the basic gameplay remains the same, you have to work really hard not to repeat yourself. Why is Sam on this planet? Why is he all alone? Where is he going this time? How can we create variety using only level names, descriptions, and a handful of lines voiced by John J. Dick? It’s like writing a kind of micro-fiction.

We came up with the main concept of a training simulation based on Sam’s experiences, which situates the story within the surprisingly elaborate Serious Sam canon, while also having the advantage of allowing some future narrative flexibility – Sam’s versions of what happened aren’t necessarily 100% accurate, if you know what I mean. You’ll see a bit more of that in future updates. We then presented Croteam with a bunch of different possible ways of introducing all this, all of them based on the very simple means we were given to communicate it, and Croteam went with what they thought most appropriate.

The individual mini-stories were built around the existing environments and boss battles, with some general input from Croteam as to what they wanted to establish in terms of world-building. We tried to draw some connections to the existing Sam universe (in the Earth scenario) and extend that universe in the direction Croteam wanted (in the Pladeon scenario), while keeping all the missions firmly in the spirit of Sam. After all, no matter where you put him, Sam is Sam. Pladeon was particularly fun to write, though.

And then there are the one-liners, of which there can never really be enough. Here some of them also serve narrative purposes, to transition you from one scenario to the next, or reward you for finishing a fight. This is where I’m particularly glad Verena is working on this project, because she’s really good at writing these totally hyper-macho lines for Sam. When we were in Croatia to work out the final script for Serious Sam 4, that really made a huge difference. My first draft had a lot of big ideas, most of which made it to the final draft and which I think will make SS4 a better game, but Verena was just fantastic at getting the tone right. Where I’d gone off in weird directions, she brought it down to Earth, adding more dry military humour and some pretty brilliant one-liners. (The criterion for whether it worked was pretty simple – when we came up with stuff in the room, did it make everyone laugh? Did we all think it was cool? It was a fantastic way to work, even though we put in long, exhausting hours and had to get our butts replaced with cybernetic implants at the end.)

What I’m happiest about so far is simply that people seem to be having a blast with the game. It’s very old-school, in a way, not trying to innovate, but trying to be really good at what it is. We had nothing to do with that, of course, but Croteam is family at this point, and it’s always great to see them doing well. And what I’m second happiest about is the feedback from people saying that the game feels like Sam. That’s the most important thing for us as writers on such a classic franchise, even if our contribution in this case was super tiny. I hope that when Serious Sam 4 comes out you’ll find that what we wrote made it better, not by changing its essence, but by embracing it.