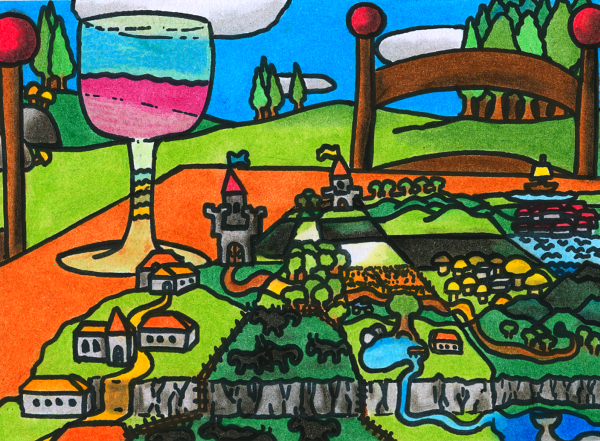 Many games are played in the Lands of Dream: some are simple, some complex; some are ancient, some are new; some are played with great reverence for traditions as old as civilization, others casually and without much thought at all. But there is one game that is played above all others, one game that is more revered and more enjoyed than any, and that is the Game of Making.

It has many other names, of course, being the most ancient and most holy of pastimes, but to list them all would be a great endeavour – almost as great as to compile a full bibliography of all those many books written on the subject. For the Game of Making always inspires passionate discussion and thought, and even across the millennia authors will fight with printed words about the subtleties of its nature.

That nature is indeed a matter of debate. It has been said that the Game of Making is the easiest of all games to play, and requires no instruction; and it has also been said that it is the most complex of all games, and none have ever truly mastered it. Both statements may be equally true, as the rules of the Game of Making are not only different from game to game, but change within the duration of the game itself.

It begins with an act of creation; all the players may be involved in this, though some may choose to abstain, participating only in the later stages. The first move determines the starting rules of the game and affects which parts of the board are initially playable, the rest remaining dark. Now the players take turns affecting the board according to the rules previously determined, and by their actions the board changes. Content and purpose depend entirely on the players and the individual game: sometimes the objective is to grow great forests, or to build cities, or to lead creatures across immense steppes. Sometimes one player builds citadels of fire and molten lead while another guides wind-spirits through oceans of cloud; at other times, all the players may concern themselves with the life of a single, infinitely small creature.

Some games last only a few hours, while others may last decades or centuries. The number of players is also quite flexible: famous games have been played by as few as one and by as many as twenty-one thousand five hundred and seven, though the latter is an entirely unique case. Conflict between the players is known to occur, but is rarely the point of the game.

Many more facts could be listed here, but there is one that is particularly noteworthy: the borders of the game are far from steady. Many times the content of the game will start to spill beyond the confines of the board, taking root in the surroundings. Formerly clean lines will begin to blur, to become one with the table or ground the board is standing on, branching out and beginning to grow beyond the disappearing edges. This process is often combined with a change in scale, as slowly the individual parts of the game become larger and larger, until the city or castle or forest that was previously just a tiny element of the game has become a place one can walk through. Some areas of Oneiropolis have their origins in such events (the Moth Quarter being the most famous), as do a number of other places and creatures (such as the Forest of Blue Carnivorous Mushrooms, the Amorous Kinkbird, or the Many-Eyed Colony of Myrg).

On occasion this has resulted in players disappearing, and many games become entirely unwinnable, the rules of the game simply changing to eliminate the concept of winning, but that has not diminished the popularity of the game. In fact, some suspect that with the game being as old as it is, more of our world than we might suspect is the result of long-forgotten games, and the games played today will have consequences yet unimagined.

Does it matter? Hardly. The world is a place of creation and change, and we are creatures of the world. All that matters is that we keep playing, never losing our love of the game.

This entry in the Oneiropolis Compendium was made possible by BiggerJ, an enormous but aesthetically pleasing alphabetic character.