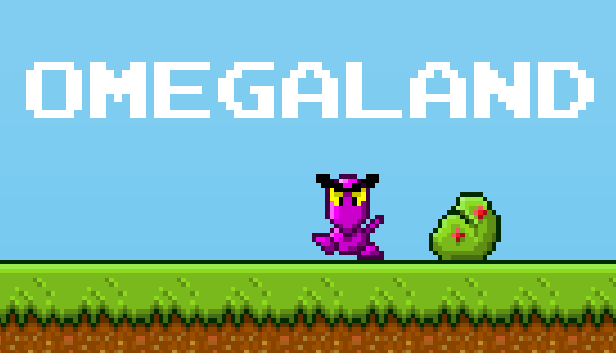 Omegaland is fairly simple, straightforward platformer. You explore the map, gather coins, buy upgrades from wizards, and try to help Princess Omega get back to her castle.

There may be a few surprises along the way.

Omegaland is, in some ways, an oblique sequel to my game Alphaland.

On the 12th of July 2017, to celebrate the 189th birthday of Nikolay Chernyshevsky.

On Steam. Eventually I will also make a version available via Humble.

How much does it cost?

$2.99, or whatever Steam translates that to in other countries.

What will Omegaland run on?

Windows, although it’s possible it will also function on Linux via WINE, although I can’t guarantee that. Its system requirements otherwise are fairly low.

Why did you make Omegaland?

Omegaland has been a long-term side project for me. I’ve been lucky enough to work on some big projects lately – The Talos Principle, Serious Sam 4, Phoenix Point, etc. – as well as working on the next Lands of Dream game (The Council of Crows, coming later this year), but there are other ways of making games, and I’ve missed those.

The main sources of inspiration for Omegaland were old shareware and freeware games, and the strange freedom I remembered from the days of making Flash games for sites like Newgrounds and Kongregate. I’ve written a post about some aspects of the game’s design philosophy here.

I realize I’m not hyping the game, but I think an overabundance of hype has created a generally unhealthy situation for many games. I’d be quite pleased if people just got to find out that Omegaland is a thing that exists and which they might enjoy, rather than trying to convince them it’s the Next Big Thing. I want people to approach it without hype, just looking for a fun little distraction. And if they find that it contains a bit more than they expected, then yay.

Can we have some screenshots?

You can download a collection of screenshots here. I have tried to avoid spoilers.

Who are you again?

My name is Jonas Kyratzes. I’ve been making odd, narrative-driven games since before “indie games” were a thing. I’m best known for the Lands of Dream series (especially The Sea Will Claim Everything) and as the co-writer of The Talos Principle. I’m currently working on Serious Sam 4 and Phoenix Point. I frequently collaborate with my wife, Verena Kyratzes; she made the pixel graphics for this game, co-designs and illustrates the Lands of Dream games, and is working as a writer on Serious Sam 4 and a number of unannounced projects.

What if I have a question?

Then email me at me@jonas-kyratzes.net.