“The Infinite Ocean sets up a mystery that persists even after you get a lot of answers. It has a thick layer of philosophy and invites a lot of discussion regarding both the plot and the issues raised.”
– Jay is Games

“Such a brilliantly written story isn’t common in our day and age.”
– Gnome’s Lair

“Turn the lights down, hike the volume up and fall into this brief but brilliant adventure.”
– Retro Gamer magazine (2003 version)

“The game is short but, again like Last Rose in a Desert Garden, is full of quality writing.”
– Alexander Tait, JustAdventure+ (2003 version)

“The game creates a deep emotional impact not unlike the one provided by LRiaDG.”
– an occasional player’s review (2003 version)

“[…] it also delivers a more philosophical and nuanced take on the hackneyed dark-SF subject matter, perhaps closer to the work of interactive fiction A Mind Forever Voyaging.”
– MobyGames

What is life? What is thought? Is there hope? Is there meaning?

How will it all end? 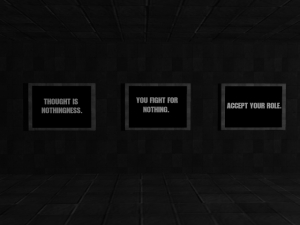 The Infinite Ocean is a philosophical sci-fi adventure. It’s also a mystery, a Myst-like adventure, and occasionally quite scary. But it’s a trip you have to take on your own, without preconceptions – so take Retro Gamer’s advice, and go into the story with an open mind.

PLAY THE INFINITE OCEAN AT ARMORGAMES

PLAY THE INFINITE OCEAN AT KONGREGATE