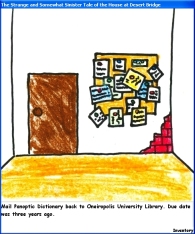 When the inventor/magician known as Old Man Bill suddenly disappears from his house in the middle of the desert, his friends, companions and pets start worrying: what could have happened? To solve this sinister mystery, they call upon their old acquaintance, pretentious game designer Jonas Kyratzes, who builds a magical portal into the Lands of Dream. Using this portal, YOU can now interact with the wondrous and colourful world of the house at Desert Bridge, and help Harold the Talking Picture Frame and his friends locate their master, Old Man Bill.

In reality, The Strange and Sinister Tale of the House at Desert Bridge is a transdimensional portal – but if your friends don’t believe you, tell them it is something of an old-school adventure game, with wonderful hand-drawn graphics, beautiful music and a lot of humour.  Or, if they’re more into feature lists, you could say something like this:

And now for the game’s requirements.

Some people have apparently said things about this portal: 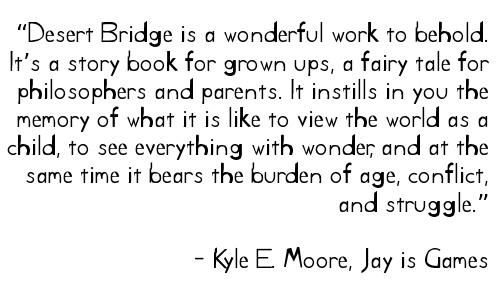 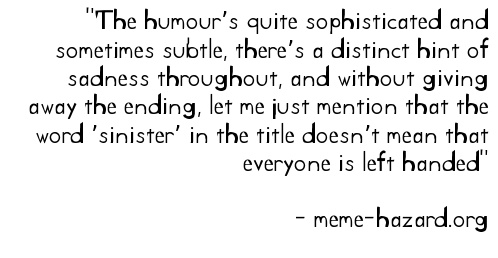 Now, before you download the game, please read the following disclaimer from Bob the Spider:

This is not a game for children. It’s actually not a game at all, of course, but a transdimensional portal to the Lands of Dream – but if you can’t grasp that, and would like to think of it as a game, then you have to understand that it’s not a “game” for children. Yes, both the house at Desert Bridge and its inhabitants are bright and colourful, and occasionally even funny, but that does not mean that they are meant for children. It’s not an adult “game” either – many young people may enjoy this. But not if they’re six, or can barely read. We like to use long words. And some of us even use words that are naughty (very rarely, but still).

So, if you belong to that group of people (in the words of Donald Trefusis), “whose grip upon the world is so tenuous that they can be severely offended by words and phrases and yet remain all unoffended by the injustice, violence and oppression that howls daily about our ears” then please fuck off.

If you complain anyway, I will be forced to assume that you cannot read, and should not be raising children. Should you persist in your complaints, I will send my arachnid army after you. You would not like that. We are hairy.

Thank you,
Bob the Spider

You may now proceed to download the game by clicking here.

For those few of you who have encountered an odd problem with Windows not liking Desert Bridge (which is odd, considering it is a type of window itself) and causing the portal to scale improperly: the problem is caused by your DPI settings, which are not the standard 96. This is an annoying issue, and a group of wild gerbils is currently trying to find a way of making it work.

The following people are responsible for the creation of this portal:

The portal was tested for transdimensional safety by (in random order):

The Strange and Somewhat Sinister Tale of the House at Desert Bridge by Jonas Kyratzes is licensed under a Creative Commons Attribution-Non-Commercial-No Derivative Works 3.0 Unported License.