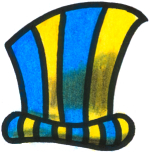 PLAY AT KONGREGATE | PLAY AT NEWGROUNDS

The Fabulous Screech is a beautifully judged tale with a massive heart and one of my favourite things of the year so far.
– owVideogames

It manages to be both very funny and very touching, as well as demonstrating an acute understanding of the way cats use their owners and their owners are grateful for it.
– Rock Paper Shotgun

This heartfelt little game is a wonderful piece of perspective and surrealism that definitely should not be missed. Give it a play, and then give someone a hug.
– Jay is Games

Unless you’re an unrepentant cynic, The Fabulous Screech is probably going to make you melt a little on the inside.
– IndieGames.com

Once again, Jonas shows us just how beautiful life can be…
– Indie Game Magazine

The story, whilst also quite simple, is elegantly told, with the ending likely to bring a tear to the eye of all but the most hardened soul.
– Adventure Gamers

Something so whimsical, so wonderful, so obviously yet collectively personal, so subtle, so funny, so deeply touching, that, well, I was touched. Really, actually touched.
– Gnome’s Lair

Your partner has bought you ticket for the season’s last performance by The Fabulous Screech and His Trained Humans, so you travel to Oddness Standing to see this unique show…

The history of this game: