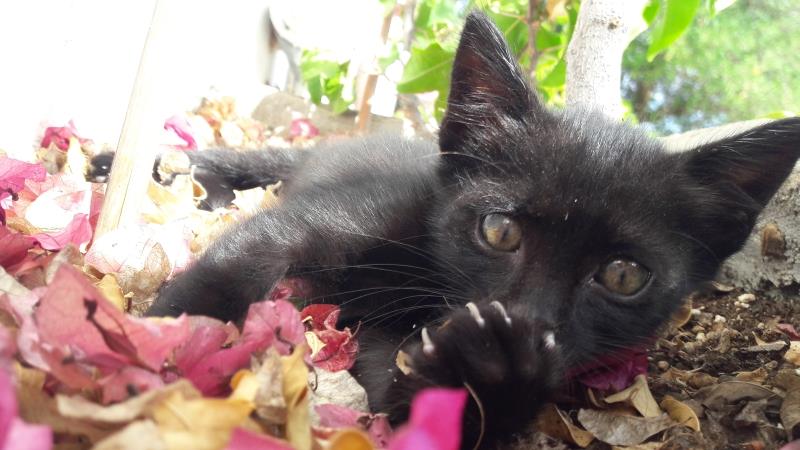 If you follow me on Twitter or Facebook, you may be aware that a few weeks ago we found a tiny starving kitten that had been abandoned by its mother. Given our lack of time and money, our pre-existing cat condition, and all the millions of complications cats bring with them, it would be foolish to take him in… so of course we did it.

He was just so… tiny!

Well, he’s no longer quite as tiny, but he’s cute and playful and happy and, most of all, alive. The bad news: he can’t stay with us. The good news: we found someone who’ll take him. The crazy news: delivering him will be something of an odyssey. We’ll have to drive across an entire country.

You may also remember our own cat, Cat. She came home the other day with a hole in her leg that was so deep you could see the bone. That’s just a couple of months after almost literally getting her throat torn out by another cat. She’s certainly not helping dispel the stereotype of black cats bringing bad luck.

Well, combined with the whole freelance writer thing, and moving, and games taking forever to finish… some money would be nice. So, if you happen to have some and want to throw it our way, one way you could do it would be to buy The Sea Will Claim Everything and A Postcard From Afthonia on itch.io for just $5. The itch.io version of TSWCE comes with a Steam key and Afthonia has been updated to be less rough around the edges. That update will also be applied to the Humble version later today.

If you already have the game on Steam, why not give the key to a friend who might enjoy it, or an enemy who might hate it?

We have a properly new game coming out soon, though, so if you’d rather keep your money for that, no problem. It’ll be quite cheap, though, just so you know. No pressure.

We’re also looking into putting some of our free games on Steam, with the option of buying some extras to support the developer. I like that model, but Greenlight eats a lot of time, so I don’t know when that will be ready, since I’m also working full-time on other projects.