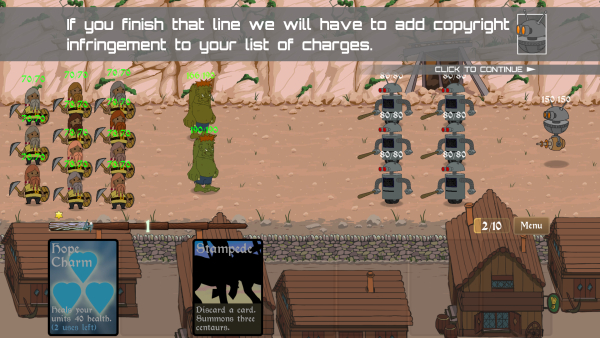 I got The Trouble With Robots from the sadly-neglected Bundle in a Box. I’m not entirely sure whether I’d heard of this game before; it’s possible, as I tend to only briefly glance at game-related news most of the time, but it doesn’t appear to have been a huge hit. Which is a shame, because it’s quite good. It doesn’t tick any of the boxes games are supposed to tick these days (innovative, social, procedurally generated, free to play, etc.) but it does tick several that are far more important to me (solid, well-written, well-designed, charming). It’s a game that knows very precisely what it wants to do and does that very well.

The Trouble With Robots is a card-based strategy game about leading an army of fantasy creatures against an army of extremely bureaucratic robot invaders who want to turn their world into a capitalist paradise. The gameplay is accessible and enjoyable without sacrificing strategy; you do have to think about which cards to pick and how to deploy them. The cartoon graphics are lovely, with real attention to detail. The music is catchy and adds to the sense of fun that prevails throughout. And the writing is genuinely witty; I smiled and chuckled throughout, which is a lot more than most games ever manage to get out of me.

I used the word “solid” to describe this game, and I mean more by that than just “it’s not bad.” I mean that the individual bits are fitted together in a way that leaves few cracks. It’s a very confident, clear design. I think that kind of solidity is something a lot of games are missing these days. Even otherwise good games.

There’s also something very enjoyable about how the story and the gameplay interact. Structurally, it’s the simplest thing in the world. The gameplay doesn’t change the words and the words don’t change the gameplay. But they enrich one another, so that the final result is more than the sum of its parts. The graphics and the music contribute to that, too – all these elements work together to produce a very specific flavour, and that’s ultimately what makes the game memorable.

Which makes me think that all these discussions about the role of story in games end up fetishizing technological solutions and miss the most important point: putting good words in the right places.

Inevitably, there are things I’d do differently. The enemies with long-distance attacks are vastly overpowered, small tweaks to the speed of magic recovery and cards per level might make the game less frustrating in some cases, and some of the optional challenges are just insanely hard. But, precisely because the game is so solid, these feel more like theoretical disagreements I have with its designer than like flaws. The game didn’t try to achieve something and failed, it just achieved something that’s slightly different from what I’d prefer. Even when the game pisses me off, I’m not particularly bitter about it. That’s a very good thing.

Time to do something about the robots that have invaded our society, hmm? I’ll be with the dwarves, they like my beard.