I’ve previously expressed the danger that I see in terms like “differently abled” – or rather in those people who make it a priority to change how we speak about disability instead of changing how we deal with it in economic and political terms. You could sum up the core of my argument like this:

Disabilities are called disabilities because they disable you – because they are problems. Redefining the problem as a purely social one, i.e. insufficient integration into the capitalist model, buries the actual problems under a thick layer of euphemistic language and moralistic outrage, which suits those who would like to change the distribution of wealth in society just fine.

I actually recently experienced a rather excellent example of that myself. You see, I have a disability. It’s a very common one, and yet one which impacts my quality of life in significant ways: I can’t see well. I cannot recognize faces at a distance, let alone read. The world is a blur to me. Glasses help, of course, but they come with their own disadvantages, like distortions due to dirt, limited peripheral vision, and headaches. And it’s getting worse; I recently went to an ophthalmologist and she told me that, as I had feared, my eyesight has deteriorated quite a bit in the last five years.

So I needed new glasses.

Germany used to have an excellent healthcare system, the kind that most Americans don’t seem to realize is possible. Like almost all the achievements of Capitalism Lite (Social Democracy), it is now being dismantled as part of the vast transfer of wealth from public to private hands that is taking place all over the West, but it’s still quite a lot better than what people in the United States have to deal with. My visit to the ophthalmologist was entirely free, for example, apart from the monthly fees I pay (which won’t go up because of it). So I was somewhat surprised to find that the German healthcare system does not pay for glasses. Glasses which I need in order to be able to function properly in society. Glasses which can be quite expensive, even though they generally last for years.

I didn’t expect them to pay for the super-fancy glasses, mind you, just the basic types. But no.

How do German healthcare companies explain this failure to do what they’re legally supposed to? You guessed it: identity.

Yes, echoing the language of identity politics, they successfully argued that being visually impaired is not a disability, but just something you are, like ginger or black or Belgian. A deformity in your eyeballs is just part of your unique personality, you wonderful blurry little snowflake you! To suggest that maybe being unable to see properly is a problem… why, that’s just ableist! And who gets to define what “properly” means, anyway? Reality is just perception, and if your perceptions are different, then that’s something to be celebrated. The fact that your head hurts and you can’t tell which bus is coming or who’s waving at you or what’s happening in the movie – that’s just part of your unique contribution to our diverse, non-ophthalmotypical society!

(Excuse my sarcasm. I know it is nowhere near intense enough.)

In my case, having to pay for the luxury of being able to recognize shapes is a burden that I can still bear, though it’s going to put a definite dent in our financial plans, especially since I also need to buy a new PC. And even if I couldn’t afford a new pair of glasses, I would still be able to survive. But my disability is completely trivial when compared to those of other people – what happens when their problems are declared null and void? What happens when a person with multiple sclerosis or cerebral palsy or Parkinson’s is no longer considered disabled? If you think that’s fantasy, I have one word for you: Atos.

In the UK, so-called “work capability assessments” are carried out by a private company called Atos, which is part of one of those enormous multinational corporations that artists are repeatedly told not to portray as monstrous. They have done all of the above, and thanks to them, more than ten thousand people have died in the last few years after losing their welfare benefits. At one point, they even classified a man as “fit for work” who was in a coma. If you put that in a movie, critics would accuse you of heavy-handed satire and writing yet another clichéd evil corporation.

And is it a coincidence that the Disability Living Allowance is to be replaced by the Personal Independence Payment? Every real problem is buried in layers of euphemistic “positive” language. (Much like austerity is being sold as “shock therapy” rather than just, you know, shock. Next thing stabbing will be called Spontaneous Surgery.) As for the other side of the coin, anyone who doesn’t enthusiastically embrace the new dogma of independence – like someone who is severely disabled and couldn’t work even if there were jobs, which there aren’t – must logically be the exact opposite: lazy, dependent, a drain on society. A benefits scrounger. 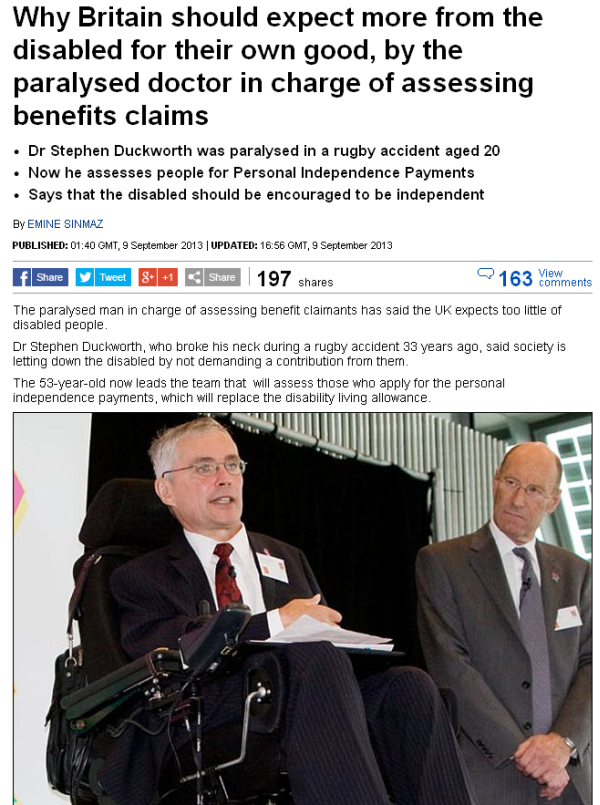 Identitarians argue that the main issues are empathy and representation. If only people knew how disabled people feel. If only they stopped using mean words about disabled people. If only everyone would step aside and let disabled people speak for themselves. But Stephen Duckworth is most definitely disabled. By identitarian logic, to attack him is to be ableist. It is silencing. It is going against the fact that Mr. Duckworth knows a lot more about what it means to be disabled than you do, so how dare you question his identity?

And what about David Cameron? He had a disabled child, Ivan, who was born with Ohtahara syndrome and died at the age of six. Do you think he has no empathy for disabled people? Do you think he doesn’t know what it means to grieve about what your child is going through? Check your privilege!

Now, some may argue that intersectionality* provides some kind of answer here, as this is “also” a class issue. But the truth is that the principles of identity politics make it impossible to respond as soon as anyone invokes identity. All that Stephen Duckworth has to do is say “I’m disabled and I know better, so if you disagree, you are oppressing me” and the discussion is over. Unless you’re a massive hypocrite and only stick to the principles when it’s convenient, of course.

As for “stepping aside and letting disabled people speak for themselves” – well, that would be Mr. Duckworth again. Oh, it’s not that all disabled people think like him. In fact, in my experience most (but clearly not all) disabled people are horrified by Atos. But if you build your politics around identity, you forget that people within one identity never all have common material interests, and capitalism is absolutely brilliant at adapting itself to social changes – so it will simply pick those people from that identity who have shared interests with the capitalist class, and give them all the media attention they could possibly want, meanwhile using the very logic that produced these individuals to silence the opposition. Stepping aside isn’t giving disabled people a voice, it’s running away from responsibility and analysis. Nobody can win this fight on their own.

But is there a way out? Of course there is: solidarity. Not stepping back or stepping in front of disabled people, but standing next to them, as part of one movement against the material conditions that keep all of us as slaves of the systems that are supposed to serve us. But solidarity requires a choice that breaks with identity. It means excluding Mr. Duckworth and his associates, no matter what they say about their unique insights. It means saying that, though they are suffering in a way you are not, they are wrong about what needs to be done. It means picking a side.

Most disturbing perhaps has been capitalism’s ability to, apparently, accept, take over and use for its own ends the slogans of the disability movement. So the long argument against the ‘medical model’ of disability is taken over by the giant insurance and health companies – the likes of Unum and ATOS – and their clients in the state, and used in their hands to promote a ‘social-psychobiological’ model of ill health and disability whose founding principles are that doctors are too expensive, not to be trusted, and replaceable with suitable computer programs; and that claimants are always lying. In fact the point of the medical model was that it identified an, often near total, power imbalance between doctor and patient (or inmate). To replace it with the power imbalance of an impersonal ATOS assessment is radically to pervert the intent of the original thinking.

In the same way the disability movement’s emphasis on disabled people’s creativity, and strength is turned against us by a parade of high-achieving disabled people – some of whom consent to be used in this way, many of whom do not – whose example is used to pour scorn on the rest of us. If we ask for independence, this is redefined as finding work – any work at all – with enforced penury as the only alternative. If we demand a voice we are given endless consultations whose outcome is always predetermined. Negative discrimination is outlawed – ineffectively – but it then turns out that what we needed was positive discrimination which is not on offer. We may apply for any unsuitable job we want but there can be no question of suitable jobs being created for us around our abilities.

So, in conclusion, we must not in any way ditch or weaken the social model but we need to sharpen its edge for the battles ahead. In those battles our main enemy, I suggest, will not be a diffuse prejudice or disablism – although we must continue the work of educating people away from such attitudes – but the capitalist state. The state it was that created our condition and the state it is that maintains us in artificial dependency, through the welfare system which is its primary means of disciplining us, through its shrinking ‘care’ provision with which it can control our daily activities, and through the rationed healthcare provision – no longer a National Health Service but private capital hiding under the capacious cloak of the state – under which we eke out our lives.

The enemy dictates the order of battle and we will need to use every opportunity to set the state against itself, through use of the law, though alliances with radical workers within the state and through relentless pressure on the political class who mediate between the state and the rest of society. We need to ally with any other victims of state oppression, such as non-disabled benefit claimants and ordinary workers. And we should be clear that the primary source of our oppression today, as before, is in fact the capitalist state in its welfare function.

*I am somewhat conflicted about this term. I have almost exclusively seen it used by identitarians to justify fragmentation, navel-gazing and an opposition to any kind of genuine class analysis or radical organizing. I do think it partially describes something real about how various forms of prejudice interact, though I think it mostly misses how they are produced and what function they serve in capitalism. All in all, it is not a model that I find useful, but I acknowledge that in some cases it has been used to successfully describe certain dynamics. I hope we can agree that rejection of a model does not constitute approval of bigotry.