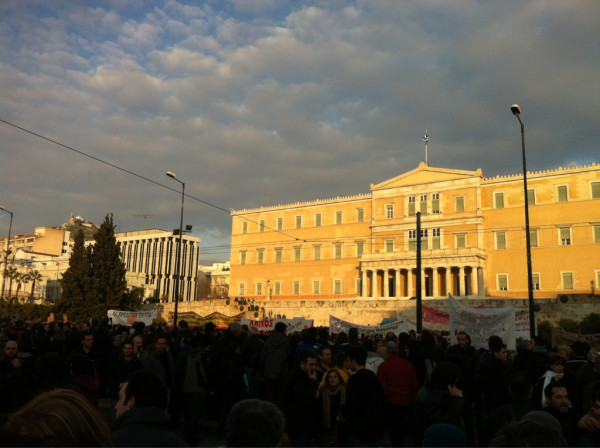 I wish I was in Greece right now, in the streets, fighting with the rest of the population for the return of democracy. I can’t, because the moment I entered the country I would be drafted by the military, but I desperately wish that I could be there. You see, normally I’m quite risk-averse, at least physically. I’m a wimp. I hate violence. I have a life to live, a wife that I love and a cat that depends on me, so I’m not particularly entranced by the idea of being beaten, arrested or even murdered by the Greek police.

But look at where we’ve ended up. Greece is falling apart. Homeless people are dying in the streets, wages are so low that it’s impossible to survive, taxes for the poor are being raised while the rich don’t need to pay, the country’s natural resources are up for grabs even if its biodiversity is severely harmed in the process, the police are cooperating with neonazis, dissenters are being rounded up “preemptively” – and the country is ruled by an EU/IMF-appointed unelected and unconstitutional government that includes an openly fascist party. Yes, the EU, which supposedly prides itself for its anti-racism, made sure that a party of Hitler sympathizers and Holocaust deniers got its hands of real political power. And there is no election is sight.

I’m not going to repost all the details of what’s wrong with the media’s coverage here. In short: no, the Greeks are not lazy racist sterotypes. Greece is a poor country in which people work much harder than in, say, Germany, and reap very few benefits. The state sector is not disproportionately huge, people do not retire at 50 (as a matter of fact, the average retirement age was already much higher than that of Germany or France years ago), and the supposed “support” Greece is getting doesn’t go to the people. It goes straight back to the German and French banks that are running this whole show.

(Oh, and the problem isn’t tax evasion, either. Especially not the tax evasion of those pesky Greek public workers. Why? Because they cannot evade taxes. Taxes are subtracted from wages before they even get them. Not that they get wages these days – many people have been working without getting paid at all for months now. Corporations do evade taxes of course – when they even need to pay them at all. This is not a uniquely Greek phenomenon, and none of the legislation proposed by the EU or the IMF is intended to change that.)

It drives me mad that I can’t be there, that I can’t add my voice to those saying enough. But that doesn’t mean that I will not do what I can to participate in this struggle. It’s a worldwide struggle, after all, a struggle for human decency. Without international solidarity, that struggle is meaningless. Without songs and stories, we may become demotivated. I will do what little I can with words and images to keep values like democracy and equality alive. I’ll fight where I can fight, speak where I can speak.

Think about what you can do. There’s always something.