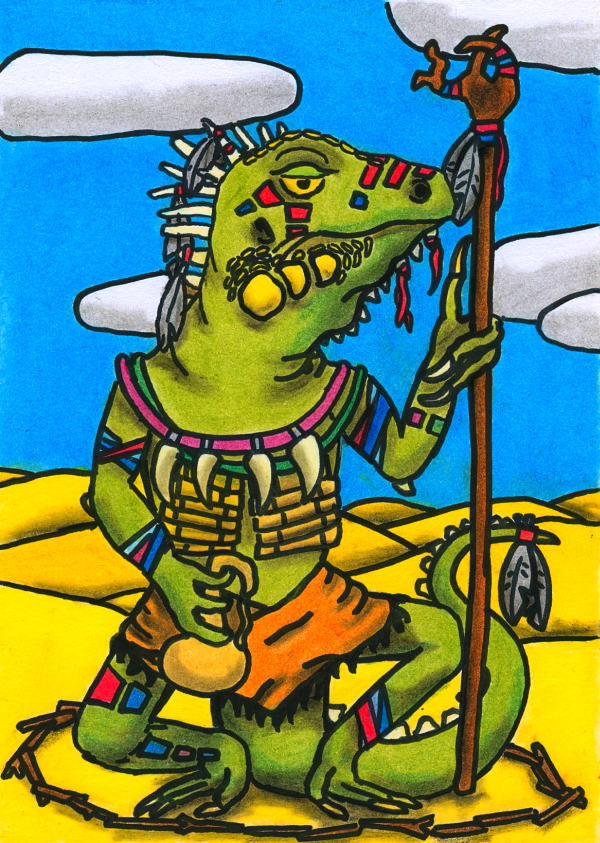 Sinjil Aegidius is the greatest and most renowned of the fourteen desert shamans. He has walked the holy path for many years, from the lush island of Iwana where he was born to the shifting sands where his visions led him. Few know the true details of his life story, as he is wont to tell the story differently each time, adding increasingly silly details while keeping a straight face. Many come to him to learn, but few are ever accepted as his pupils. “Too many of them are interested in magic,” he has been known to say, “and too few in wisdom.”

There is no question that Sinjil possesses great magical powers. The vision that set him upon his path was of the Blue Crow, the most mysterious of spirit guides, and during his initiation he danced with the spirits of the desert wind in the secret places where the sands remember the sea. He knows how to walk between dreamworlds, how to ask a favour of a cat, how to find the lost stories of one’s childhood; he knows how to sing to the stars and be heard, and how to bargain with the shadow of a stone, and how to prepare for one’s death – but he does not know how to stop foolishness and hate.

He learned what he calls his greatest lesson in a faraway land torn by centuries of war and conquest. He had travelled there to learn the ways of the ancient cults of that land, to see the ancient relics and monuments with his own eyes. Yet his revelation did not come in a holy place or a temple, but in a small village that had never been of any great importance to anyone. It was there that he saw the madness of murder perpetrated upon the weak and helpless by those enamoured with their own destiny and superiority. It was there that he saw the destruction wrought in the name of half-remembered histories and greed, lives and lands stolen without pity or remorse.

He saw death in the streets, but none of his magical powers could stop it. No matter how much he danced or chanted, death would come to the villagers. Neither his magic gourd nor his spirit stick could oppose the forces bearing down upon them; and even if they could, he would not know where to begin. It was on that day that he understood that magic was nothing without wisdom. He did not dance or chant in that village; but he grieved.

A heaviness has been in his soul since that day. He does not dance as quickly anymore, nor does he chant as often, but he has not stopped laughing. He listens to the wind-spirits, and to the stories of pain that they carry. He walks in the dreamworlds. He teaches. He learns. He prepares.

This entry in the Oneiropolis Compendium was made possible by D. T. Brummer, from Melbourne, a place in Australia which is both factual and interesting.