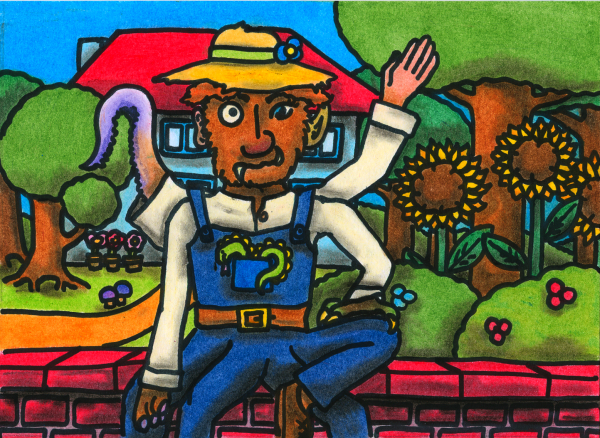 Everyone thought they’d figured out the village idiot. Silly creature, mutated and ugly, prone to falling off walls. Someone to be pitied, to be mocked, or to be ignored. In a way more akin to an animal – probably part animal, anyway. Always talking to his pet lizard. Where did he get that thing? Maybe he should’ve been a Mutant Priest of Gloop.

Some people were nicer to him than others, but few ever talked to him; a number of people didn’t even know that he could speak. The nicer folks sometimes brought him food or old clothes to wear, especially when it got cold. It was the right thing to do, their parents had taught them. Their parents, too, had fed and clothed the village idiot. So had their grandparents. In fact, if anyone were to think back, the village idiot had been around an awfully long time.

But one didn’t think about such things. To suggest that anything odd might be going on would be highly improper. The very fact that the village was in the Lands of Dream was vaguely embarrassing. It was all much too mad, really. Maybe that nice Mr. Urizen would finally bring some order.

When the troops came marching in, many in the village cheered. The village idiot was nowhere to be seen.

It took some time for the villagers to realize that the sort of order Urizen brought was not to their liking. They’d always said that foreigners (everyone not from the village) didn’t work hard enough, but when they realized what “working hard enough” entailed, it suddenly came to them that they might have been a little wrong. As the hours on the fields became longer and the time to live what had once been a normal life became shorter, they started to resent the tyrant they had once cheered on, or at least been content to ignore.

But the village idiot was not a friend of the occupation. The village idiot moved in the old streets and the secret muddy places. He spoke to his friends the ravens, and the ravens carried messages to the resistance in the mountains. He danced little dances around the fire, and the soldiers had nightmares. He farted at the mess hall and gave the soldiers diarrhea. When he walked down the street, Urizen’s people stumbled. Sometimes walls fell on them. When they were practicing their archery, he sang a little song, and they all took an arrow in the knee.

He couldn’t defeat an occupation on his own, of course. But he helped. And in time, people woke up, and said “no more!” Then it came in handy that most of the guards were exhausted, bruised and limping. But that’s a different story.

As for the village idiot, he died a tragic, lonely death when – oh come on, of course he didn’t. He went to Oneiropolis University and got a degree in fourth-dimensional literature. Then he went on with his life. Not everyone who looks funny ends badly.

This entry in the Oneiropolis Compendium was made possible by a different village idiot.