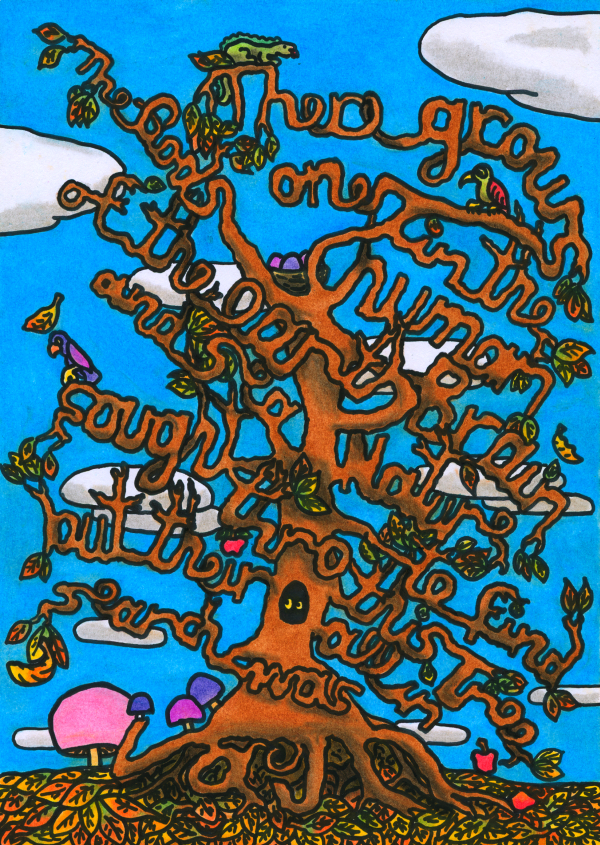 In a place unknown to all, where paths vanish under drifting leaves, there stands the Tree of Words. Many have seen it from afar on their travels, and some few from close up, though they never afterwards remember the way. People who have not seen it, or who prefer to tell themselves so, call it by silly names like “the Poetree” – but those who have truly gazed at its roots and branches know better.

Some who have stood beneath it have called it beautiful and comforting, a source of profound tranquility. Others have felt an unease in its presence, a restlessness, an unsettling awareness of their approaching end and the tasks left incomplete. Some have come to the tree by night and storm and found shelter; others have seen it as a dreadful shadow, its arms stretched out to grab them. One traveller fell asleep under it, and became either a prophet or a madman – depending on who is asked.

The Tree bears fruit, but not by the seasons we know. Eating of it is a dangerous affair. To some the fruit brings true wisdom, to others a pernicious deceit that seems like wisdom; to all it brings visions, and from those visions some never return.

As for the creatures that nest in the Tree, many have sought to consult them in matters of importance, but though they are friendly, their advice is not to be taken without thought. A king once came to them after a long journey of search, and asked how he might better rule his kingdom. The lizard said: “Show thy might, and guide thy people with fear.” And the birds said: “Live by no rules but thy own, and care for nought but thy heart’s desire.” And the voice in the hollow said: “Thine is the power to lead; lead, therefore, so that thy line will prosper.” And the king returned to his kingdom, and did as they had said. Thus his people were plunged into misery, and rose up and killed him, and afterwards lived better lives, saying “the best sort of king is no king at all.”

Another time a sculptor from a great city came to the Tree, and asked what she should do with her art, for it brought her no happiness; and the voice in the hollow said: “Take thy own life.” And the birds chirped: “Kill thyself.” And the lizard whispered: “Shatter thy bones.” And in her terror and despair, she almost threw herself to her death. But then she returned to the place where her work was placed for the public to see, and with a great hammer she smashed all that she had made, laughing gleefully, for she hated the unlovely art that was the fashion of that city. And in her crafting-place she sculpted many new works, beautiful and pleasing to her eye, and they said that her career was quite dead.

So if you should ever find yourself standing beneath the Tree of Words, listen carefully and with respect, but doubt all you are told, knowing that beauty and terror grow from the same branches; and prepare for great changes.

This entry in the Oneiropolis Compendium was made possible by Frank Powers, a man with a horn.