On Thursday we drove to Kassel to attend Spielsalon, an exhibition dedicated to “author games,” which included Alphaland. The drive took much longer than the internet had told us, but we still managed to get there before the exhibition actually opened up.

I didn’t really know what to expect, so I was quite nervous. The venue was the Fridericianum, one of the oldest public museums in Europe (built in 1779), and quite impressive. That didn’t make me any less nervous.

The exhibition was held in a part of the museum known as the Kasseler Kunstverein, and it was lovely. The games were set up in a very elegant way in a space that is bright and pleasant. The staff/organizers turned out to be exceedingly friendly and genuinely interested in the field, even if some of them were quite new to it.

The instructions for the games were printed on cushions. Seeing the Alphaland cushion was as hilarious and awesome as you would imagine it to be. And surreal. So very surreal. After spending the last eleven years sitting in tiny rooms making games at my computer, it was very odd to see them in a public setting. I don’t think I’d ever met anyone who’d played my games without being a friend of mine before. The indie experience is often a lonely one.

Speaking of sureality, one of the strangest and yet oddly delightful moments was when Paolo (of Molleindustria) and I helped set up At a Distance – with Terry on Skype. A Greek developer living in Germany and an Italian developer living in Pittsburgh helping an Irish developer living in England to set up a game in Kassel that was originally made for an exhibition in New York… can you think of a more transcultural situation? Anyway, as it turns out, the folks at the exhibition has accidentally switched some stuff around when setting up the game, which made it function incorrectly, but we got it working.

The day also included three presentations and a panel discussion.

The first presenter was Paolo Pedercini of Molleindustria. While I was already familiar with his work, it was still interesting to listen to him talk about his ideas of using games to inject radical ideas into the political/cultural discourse. It’s something that I understand and that makes sense to me – an act of cultural subversion.

The second presentation was held by a Japanese artistic duo called Exonemo, and quite frankly it was rather embarrassing. I don’t want to be mean about this – the two of them seemed like nice people – but the work they presented was both absurd and irrelevant. Basically they use games in some of their artistic installations. Which is fine in and of itself, but their installations are just run-of-the-mill modern art nonsense desperately pretending to be meaningful or deep. There was very little engagement with gaming or the themes represented in games, and even less skill or artistry involved. If anything, their installations felt like an exploitative attempt by artists with nothing to say to hop on a bandwagon. They ended their presentation with their highly artistic and game-like… T-shirt shop. No, really. Your website’s T-shirt shop is now an art project? 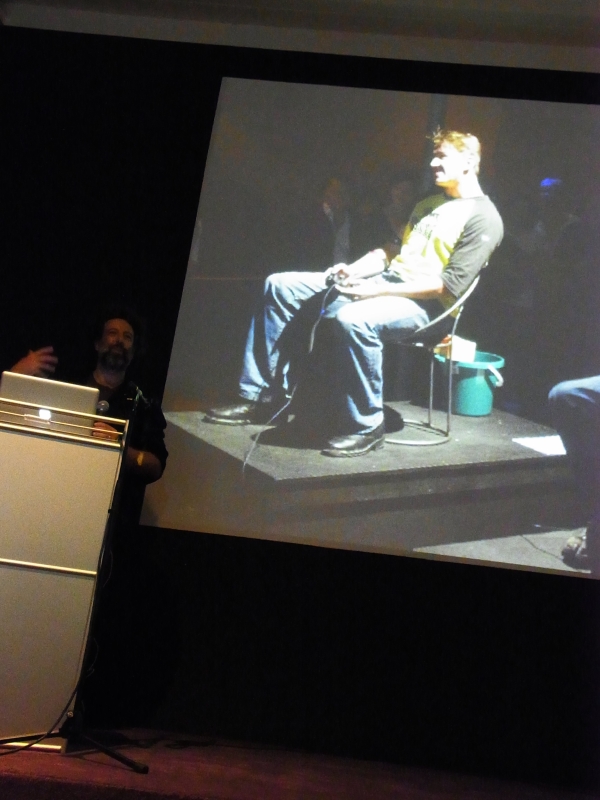 The third presenter was UCLA Game Lab’s Eddo Stern. His presentation certainly had some very interesting aspects (especially a game that involved sensory deprivation), but it also made me realize that I think there’s not enough focus on games as an artistic medium. There’s a lot of talk about anti-games, notgames, manipulation of games to do various things, games used to create public experiences… and very little talk simply about delivering an artistic experience through straightforward gaming. It’s as if we were heading directly for postmodernist degeneracy and “playful experimentation” without even having reached the point where we’ve learned how to make good games.

See, what interests me is actual games. Not “games as X” or “games in Y” but games: the experience of immersion, of interactive storytelling, of gameplay; the sheer joy and emotional power of the gaming experience; the intellectual and moral engagement a digital world can produce. I do believe that we need to be flexible, to see form as one of our many tools, but I’m not really interested in form per se. If we start believing that the only games with artistic worth are the games that aren’t fun to play, we’ll soon be as irrelevant as the postmodernist novelists whose novels aren’t really meant to be read, only to be admired.

Furthermore, I think there is plenty of value in the types of games we’ve got right now. Oh, sure, I’m as bothered as anyone about the obsession with sequels and remakes and the resistance to new ideas. But many of the concepts we’ve got – platformers, RPGs, Metroidvania, adventure games – are actually perfectly promising. Take RPGs as an example. There are quite a few of them, but we’re still miles away from even having scratched the surface of what’s possible with such games. I’m not really all that interested in “radically re-inventing the RPG” before we’ve even managed to master “regular” RPGs. That doesn’t mean we should be making more of the same; mastering the form will require plenty of original thinking and hard work. But what I want to see is the RPG equivalent of the Odyssey or the Iliad, not the equivalent of some performance artist reading the ancient classics backwards while on a pogo stick.

I’ve often thought that the most radical act of theatre possible these days is to perform the classics straight; experiencing a Shakespeare play that keeps to the spirit of the original is a much more powerful and subversive experience than seeing the version with the nude guy and the projection.

That’s not a popular thought nowadays, of course, because making boring old regular art requires a great deal of skill and inspiration, whereas goofing around and calling it playful invention requires nothing except ego.

That doesn’t mean that there isn’t room for something else. The Molleindustria games are a good example of that: made with a great deal of skill and with a very precise idea of what they’re meant to accomplish, they use our understanding of games to make us think. But most of them wouldn’t be able to function that well if there wasn’t a world of games out there that they could comment upon; and that world wouldn’t have such power over us if there wasn’t something to it. That something is what I am interested in.

Finally, I realized that I have next to no interest in “gamer culture” or “gaming culture.” Games are certainly cultural works, but an insular, fanboy-ish approach to them feels rather destructive to me. There has always been a great deal of interaction between the arts – music inspired by poetry, poetry inspired by sculpture, film inspired by music – and I don’t see how the elevation, ironic or otherwise, of a few rather superficial elements of games-related pop culture to this near-religious status is helpful in any way. Let games contribute to culture, not to the formation of cliques. I don’t want to live in an age where all we talk about is games, but in an age where we can talk about a game and a novel and a film in the same conversation without having to apologize for it.

In that sense, I can answer the question posed by the moderator of the panel discussion – “Do games belong in a museum?” – with a yes. Not because that’s where they need to be played, but because putting them there helps move the public discourse in the right direction, if only a little: towards the idea that there is no contradiction between something being valuable enough to exhibit and yet enjoyable enough to play on your screen at home.