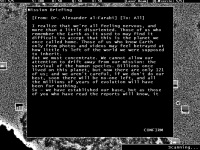 I have good news that are also bad.

Phenomenon 32 is getting close to being finished. All that’s missing is the “endgame” areas – that and the new voice acting I recently decided upon. Yes, I’ve decided to add a few more characters (and actors to voice them). It’s an important decision, because it means I have to write more text and spend time recording it, but once the choice was made it seemed so essential that I can’t imagine the game without it anymore. So this is likely to add a few more days to the release date, but it’s going to elevate the quality of the storytelling to a whole new level.

Storytelling, you see, was one thing I was worried about. The game relied too heavily on telling its story through visuals and music – through atmosphere. But this isn’t a game about the ruins of Earth; it’s a game about humanity, and humanity needed a stronger voice (literally, in this case). I’ve written several pages of text now, and for the first time I feel like I really get the game. Before this, I was happy but nervous – now I feel like I know what I’m doing. Now the game has a soul.

And, you know, I think it’ll be awesome to have a full voice cast.