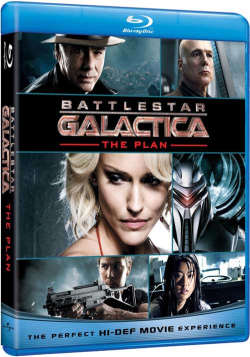 So, apparently, the Cylons didn’t really have one.

It’s amazing, really. The Plan manages to make Battlestar Galactica – a series that prided itself on the fact that its four-season arc was completely unplanned – make even less sense. There were quite a few plot elements that felt rather forced in the actual series, but with the help of The Plan, the entire thing now feels utterly incoherent.

On top of that, the writing itself, on a line-to-line basis, is terrible. This is a problem that BSG rarely had: there were often great structural problems, but at least the individual sentences didn’t make me want to vomit. But in The Plan, even excellent actors like Dean Stockwell deliver artificial and boring performances thanks to a script that is 50% exposition and 50% bullshit. And it’s not like it’s a surprise, given that he has lines like this one:

Cavil: “Then I’m going to prepare to wipe out humanity once and for all!”

I mean, give me a fucking break! BSG was supposed to be about the ambiguity of these characters, about their motivations for the terrible deeds they commit. Is this Battlestar Galactica or Austin Powers?

And whereas the series managed to weave in philosophical questions, the only thing that The Plan has is little pseudo-philosophical lines here and there that make next to no sense. To make it worse, these idiotic lines are supposed to explain one character’s sudden conversion to the idea that killing humans is wrong – after he spends almost the entire film thinking the exact opposite. Would it have killed you to have the character have an actual journey? Would it have been so difficult to make his change in perspective the result of his experiences? The setup is perfect: two copies of Cavil, starting out with the same ideas, experience different aspects of humanity and end up with different viewpoints. But no… instead we get one being The Very Evil Villain Guy and the other one suddenly switching to Wise Cavil for no apparent reason.

But there’s so much more than just this. It’s bad enough that the film is basically a clip show, but at at least the little bits of story inbetween stuff from the series could make sense. But they don’t: half the time they completely contradict the series. It’s as if the writer didn’t even sit down to watch the first two seasons, or thought that her wonderful “twists” were so clever that they should be put in whether they made sense or not. But this kind of writing is exactly what made me aware of Espenson as someone whose writing had no regard for continuity: “Deadlock,” a fourth-season episode that she wrote, turned around Chief Tyrol’s whole outlook without any explanation, strongly contradicting the character’s behaviour just two episodes before.

(She also wrote an episode of Firefly, and that was excellent. Just so you know.)

And you know what? I expected there to be continuity problems. I thought that the point of a film called The Plan was the show that the Cylons did have a plan – something that the series kept saying, but failed to actually show because of the inherent problems of writing a story without any kind of, well, plan. (Yes, I know Stephen King does this with novels. But then he goes back and edits, which you can’t do in the medium of television.) Any attempt at showing an actual plan would probably have caused some contradictions. But The Plan doesn’t actually reveal anything about the damn plan at all! I would even say that it shows that the Cylons didn’t have a frakkin’ plan in the first place. The only line that really refers to the plan says that the plan was to KILL ALL HUMANS! But you know what’s even funnier? Those parts of the series that hinted that the Cylons did have a plan, like Helo’s story… those aren’t even mentioned! This movie isn’t even The Plan, it’s Evil Cavil Tries To Fill In Plot Holes (And Fails).

Oh, and a note on the nudity. I don’t mind nudity in art. Hell, you could put scenes in a movie of characters having sex in completely graphic detail… if it was justified. “It’s about the beauty of the human body” is a justification. “It’s about being realistic” is a justification. “It’s about celebrating sexuality” is a justification. Even “I wanted to piss off prudish people” is a justification. But “it’s on DVD so let’s show some titties” is not. And this actually goes less for the bar scenes and the shower room scenes than it goes for the new character of Bondage Six, who has no purpose whatsoever in the story other than prancing around in her underwear because some fans think Tricia Helfer is hot. At least in the actual series her sexuality was part of the story, part of the character: it made sense, and it never bothered me. But this is just an excuse to put the actress in her underwear so more people will buy the DVD. And that kind of greed, and that kind of adolescent thinking, really undermine any seriousness this film might have attempted.

All in all, I had a lot of problems with Battlestar Galactica, but that’s not the reason I disliked The Plan so much. I rarely thought that BSG was boring. I rarely thought that the dialogue was ridiculous. I almost never thought the acting was bad, and certainly not on any of the leads. But all of those complaints apply to The Plan. It’s a boring, incoherent mess, and the fault lies squarely with the writer.