After a bout of “real” work, I am now back at the task of finishing Phenomenon 32. After that, it’s back to editing and finishing The Great Machine: A Nightmare. After that, the novel. There’s also a few interesting side projects coming up, but nothing gigantic… I think. I’ll let you know as things develop.

If you’re wondering why Phenomenon 32 is taking so long, it’s because I’m altering a lot of its content. I was unhappy with the simplicity of large parts of the gameworld, and am taking steps to make it more complex and difficult. I’ve also been playing around with Construct, which I will use for my next game.

I am putting a great deal of effort and time into all of my projects right now. For quite some time now, I’ve been feeling that I need to move on – I’m tired of this existence as a student, wasting so much time with things I am only partially interested in. I need to be working on real stuff – creative stuff. And I need to get to the place where I can do this as my main occupation. To achieve this, I am going to be working on all my projects for several hours per day, every day. And I’m going to be asking for your support – not necessarily financial, but also support in spreading the word and helping these various works reach a wider audience. Word of mouth is what the internet is all about, right? I’ll be putting up a revised “how to help” page in the next few days.

Oh, and here’s a screenshot from the combat system. (Just to make this clear: the combat graphics are not animated and not 3D. This is turn-based strategy.) 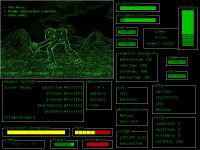