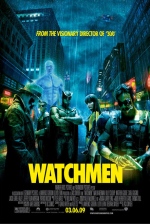 I hated 300 with a passion. It was one of the dumbest and most offensive films of all time. And Zack Snyder’s mediocre-to-crappy remake of Dawn of the Dead was nothing like Romero’s masterpiece.

So I have some trouble confessing that I actually rather liked Watchmen. It was a good adaptation. It didn’t shit on the original, it was well-acted and well-shot, and was generally enjoyable and thought-provoking.

Adam Cadre said a couple of interesting things about the film:

That’s different from saying that it was a good idea to make a movie out of Watchmen in the first place. The story does lose something in the transition to the screen. If I had to put a name on it I’d have to say that it’s missing the… chunking, I guess? The book is divided up into twelve chapters, each of it with its own internal organization, and I did feel that something was lost in running them all together (and blunting the impact of some of them through compression: at 2 hours 43 minutes, the film is way too short). Even more, though, I missed the way that in the book, a panel is eternal: you can linger over the words, study the image, contemplate it as a small work of art in itself. In a movie, speech becomes temporal. Sentences whip by and are lost in time. I can’t imagine how much of the language would have blown past me if not for the fact that I could already mouth the words along with the characters.

I do have to mention one way the film improved on the book: Laurie Jupiter works better as a real girl. Dr. Manhattan returns to Earth when he realizes that the unlikelihood of any particular organism existing — “the odds of your ancestors being alive; meeting; siring this precise son; that exact daughter” — makes every lifeform a miracle. He looks at Laurie and marvels at the odds overcome “to distill so specific a form from that chaos.” And, well, that line works a lot better when it is a specific form! A specific human actress, rather than a fairly abstract drawing that could be anyone!

I very much agree with all of the above, but I have to add one thing: visually, I could never get into the comic. The ideas, the writing, everything was awesome: but the art never worked for me. Maybe if I had an edition printed on better paper I would feel a little differently. Maybe comics just don’t work that well for me. I don’t know what it is. But I felt that the visual immersion of the movie was a real plus.

Negative points? The score could’ve been better. It wasn’t bad, but it could’ve been more memorable and stirring. And though I agree that it’s much better having a real actress playing the character, Silk Spectre’s hair and costume conspire to make her look silly.

And, well, it’s all much too short. The detail in Watchmen (the comic) is an important part of the achievement, and unfortunately we live in a culture that doesn’t do 10-hour movies. So this was a thoughtful movie, but it had nowhere near the depth of the original.