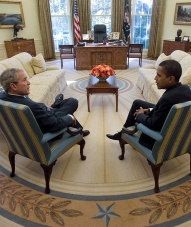 It’s depressing to see so many people going wild over Obama. It’s nice, of course, to see that what people are expecting of him is all very progressive and left-wing (he was voted as the anti-war, anti-everything-Bush-stands-for candidate, after all, and mostly that’s left-wing sentiment, even if people don’t want to say it)… but the fact that very little of this is likely to actually happen is so painfully obvious. People listen to his inauguration speech and pick out the things that sound progressive, and disregard the things that will tell them a whole lot more about what’s coming.

Yes, Obama is likely to restore science to its proper place. He’s not going to be pushing Creationism (but that’s a pretty low standard). Yes, he is likely to be a lot less racist when it comes to people of other countries (which doesn’t mean he won’t persecute them for other reasons).

One of the main themes of Obama’s speech was the collective blame all Americans share for the current economic situation, and how sacrifices will have to be made. Well, who do you think will have to make these sacrifices? The majority of the population that does all the work and whose living standards are falling at extreme speeds, or the 1% that does nothing and lives off of an absurd and outdated economic system that is falling apart in front of everyone’s eyes? Obama talks about cutting government services. Is he talking about investing less in the army or in developing more destructive weapons? Is he talking about throwing fewer billions to the banks? No, he’s talking about the few programs that are left that allow people to survive in this dysfunctional economy. He’s talking austerity.

And what about his cabinet? How is a combination of people who worked for Clinton (who also bombed Iraq, whose embargo killed children in the hundreds of thousands, who bombed Serbia and did all sorts of other nasty things in Somalia and Haiti, who introduced the concept of “rogue states” and who also continued cutting social programs) and people who worked for Bush (you remember him, right?) change? It’s not change. It’s the same damn thing wrapped in different paper.

Obama isn’t anti-war. He’s just for different wars, equally destructive and unjustified, but more successfully waged, and explained away as humanitarian intervention (with bombs). He wants to attack Pakistan. He wants to expand the war in Afghanistan. He doesn’t want to take the option of bombing Iran off the table. He wants to recruit nearly 100,000 more soldiers.

Obama isn’t even remotely questioning this whole idea of “the war on terror” that the Bush administration used to justify its imperialist actions. The point isn’t to fight the war with different weapons, it’s to realize that there is no damn war. This “war” is a construct that serves those in power – on both “sides” of it. It’s a fantastic excuse to do all sorts of horrible things, and to have people do anything you ask of them, whether your name is George Bush or Osama bin Laden. But of course Obama knows that. That’s why he could appeal to the huge anti-war sentiment in the US to win against Hillary Clinton, and then go on to drop all of that to make his corporate sponors feel at ease.

Changing the face up there is not real change. Change is only real when it affects the structures that define politics. With the Obama administration, all of these structures will remain the same, and so will the ultimate result of the government’s actions.