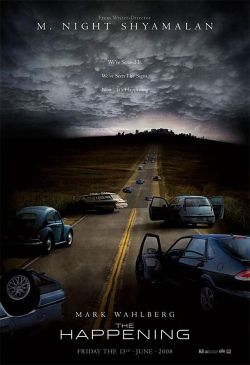 (This, in case you were wondering, is a review of the film The Happening, by M. Night Shyamalan, and some thoughts about his work in general.)

First, Shyamalan gifted us with The Sixth Sense, a movie about dealing with pain and loss, overcoming fear and working towards compassion, and using your gifts to help and heal others. It was successful because people wanted to see the scene with the kid whose head is half missing. “Whoa, creepy!” and all that. And it was remembered because of the twist at the end, which is nice but not the point of the movie.

Then there was Unbreakable, a film that sounds and feels and looks absolutely unique, featuring the best and most layered performance Bruce Willis has ever given, also a fantastic performance by Samuel L. Jackson, an incredible score by James Newton Howard, and a very original plot about finding yourself that succeeds at being dark and inspiring at the same time. Unfortunately it also has a really good twist at the end, which also isn’t the point of the movie, but was apparently the only thing people were capable of latching on to.

Third came Signs, which gave Mel Gibson and Joaquin Phoenix deep and simultaneously hilarious parts, and which was scary in a subtle, intelligent way, and which had a twist ending which was well-conveived but ill-executed. But at this point, barely anyone was actually watching the movie anymore, they were just waiting for the twist, and they all missed the wonderful scenes between Gibson and Phoenix and the children – some touching, some hilarious.

Then there came The Village, a profoundly touching love story that was marketed as a horror movie, and which people went to see hoping to see some gore (or at least something scary)… and the twist, which once again isn’t the point of the movie (except in that it propels the love story in a different direction, and makes the ending a lot more positive and hopeful and progressive than it would otherwise have been). And of course people complained, and the critics hated it, and missed the beautiful cinematography, yet another great score by James Newton Howard (Signs was OK; more on that later) featuring the amazing violinist Hilary Hahn, amazing performances by every single actor, and a script that is more intelligent and complex than the publicity ever let anyone think. Those who wanted a horror movie hated it. Those who wanted a period piece hated it. Those who just wanted to hate it hated it. Very few people got what it was actually about, even though it’s entirely obvious. Publicity can all too easily work against a movie.

And finally, there was Lady in the Water, a bedtime story that is half comedy and half drama, full of underplayed sadness, eccentric but likeable characters, and a hilariously mad self-referential critic character played by the wonderful and underrated Bob Balaban. The critics, who generally hate anyone who makes movies that are subtle and emotional instead of contrivedly sentimental or exhibiting apathy disguised as world-weary cynicism, hated its guts. And I don’t think they took to being made fun of very well, either. Nobody got Lady in the Water – nobody got that large parts of it are funny and silly and meant to be so. That this is what a supernatural event might be like if it happened to everyday, flawed people. In a way, it’s a very realistic movie. But the very idea that art may be meaningful, that normal people can change the world… not very popular. Especially when there’s a well-done anti-war undertone to the whole thing. Can’t have that, no. And to top it all off, Shyamalan gave himself the part of a flawed but very important character. That’s just egocentric. When an actor casts himself in the lead part of a movie he’s directing (see Braveheart), that’s just super – but when a director, who has also done some acting for most of his career, gives himself a small but important part… that’s a crime.

M. Night Shyamalan has the problem that anyone who is both good and successful, while simultaneously maintaining integrity and vision, has: it has become fashionable to hate him and his movies. It has nothing to do with the actual movies he makes. Which is one of the reasons The Happening is likely to fail – had it been directed by John “Boogie” Generic the Third, Lord of Troutville, it would’ve been a real success, hailed as a “shocker” that “strikes deep into the heart of modern fears” while simultaneously having “strong, unique performances by actors cast against type” in a movie that has “more levels than just that of horror.” Or something like that.

But that is unlikely. Chances are it will fail at the box office for two reasons: it’s a Shyamalan movie, and it’s really old-fashioned. What does this mean?

So what is likely to happen? People will complain about the film being preachy. The performances will be trashed, especially Mark Wahlberg’s – because he was a rapper, or because it’s a Shyamalan movie, or because some women find him attractive, or because some people just don’t want to admit that he can act. Kind of the Ben Affleck effect. (Affleck is actually an even better actor, and a really good writer. Shame the media were looking for a toy to play with. He did make some crappy movies, but who hasn’t? He also turned in some great performances and was ignored for the longest time.) Some people will even complain about twists, when there really aren’t any. There are some plot developments, sure, but if you count those as twists, you’re an idiot. Same goes for the ending.

Others will find the film too slow, too boring, or will compare it unfavourably to Cloverfield and similar content-free shakycam trash. And maybe thirty years from now, people will see that this is a pretty good film. After all, they trashed Blade Runner. And Citizen Kane. And The Matrix Reloaded/Revolutions. And Star Wars. And Southland Tales. And a lot more of my favourite movies. But the real question, to my mind, is what will happen to the career of M. Night Shyamalan, one of the most talented and visionary writer/directors I know, someone with both the technical talent and the originality that mark a true artist. If The Happening flops, as it probably will (I saw the preview in a cinema the size of a cupboard; they were playing Sex and the City on the big screen), this will make financing even harder to find for his next project. And I’d really like to see what else he’ll come up with.

Third edit: More up-to-date thoughts in A Summary of Shyamalan.