Little Tiger, burning bright
With a subtle Blakeish light,
Tell what visions have their home
In those eyes of flame and chrome!
Children vex thee – thoughtless, gay –
Holding when thou wouldst away:
What dark lore is that which thou,
Spitting, mixest with thy meow? 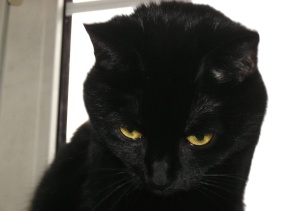 This is a photo of the beast that, until about five minutes ago, was sleeping on the towels in our wardrobe. She is now sitting on the windowsill, staring out onto the street. No, wait – now she seems to be meditating.

I’m usually not big on posting biographical details of my life in this blog – they’re not really of much interest to anyone except me – but the cat is obviously such an important part of my everyday life, as well as my philosophical outlook, that it might be a good idea to say a few things about her.

(She has now moved to my table, to check out the sounds Zathras is making in the aquarium. He just went back into the water. Kitten is now sitting on top of the aquarium, staring in. We call this Cat TV.)

I first met the cat when she was still a very tiny kitten, more than four years ago, back when Verena was still living with Mr. Morden. The three of us were writing Star Warts: The Panto Menace, our first panto – though thanks to Mr. Morden, Verena never got any credit for the writing.

(The cat has now buggered off to the other room, where she’s sleeping on the bed.)

Anyway, I remember the cat as this incredibly cute, hyperactive little thing. And that’s pretty much what she’s still like. The only thing that has changed in the last few years is that she’s become a lot more fond of humans.

After Mr. Morden left Verena, and during the time that Verena lived with a roommate (a choice now greatly regretted, since that person has caused so much trouble), the cat kind of went wild. Not because she missed Mr. Morden, but because she’s  a cat who likes to go out, and with Verena being the only person who could go downstairs and pick the cat up, there were many cases where the cat spent way too much time outside, and was then not so happy to come inside again – especially since the old lady downstairs would let her into her flat so often that the cat probably didn’t know where she lived. (Not knowing if the cat was inside or outside made picking her up even more difficult.)

By now, however, these problems have been solved. I figured out a system that both the cat and everyone else is happy with: we let her out sometime around 12 at night, and I get up every morning at 7 and pick her up. (We can’t have a cat flap because the people living in this house object to that, and the outside of our door belongs to the house, not to us. Yes, that makes a lot of sense, doesn’t it? And the door downstairs is even more out of the question. A cat flap would be too ugly. Besides, half these people hate everything that lives.)

So this is our daily ritual:

Doing this every single morning is the reason that I’m almost always tired. But it’s worth it, because this way the kitten is happy.

And now you know about the third member of our little family, the insane creature known as Cat. Oh, I almost forgot – she doesn’t have a name. Except Cat, kitten, monster, and so on. Things have been tried in pre-Jonas days, but names just glide off her shiny black fur. Think of her as an Elemental Cat.

Remind to write a post about why God is a cat. It explains everything. 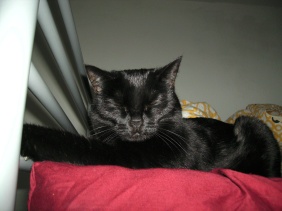